Russia is first to register a vaccine against coronavirus 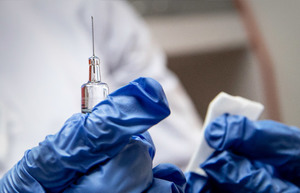 Russian President Vladimir Putin at a meeting with members of the government on Tuesday said that the world's first coronavirus vaccine was registered in Russia.

He expressed the hope that Russia will launch a mass production of the coronavirus vaccine in the near future. The President also stressed that vaccination should be "exclusively voluntary" so that everyone can benefit from the achievements of Russian scientists.

“I know that work on vaccines of this kind in Russia continues in other institutions. I wish all specialists success. We must be grateful to those who took this first step, very important for our country, in general for the whole world,” the president said.

Putin asked Minister of Health Mikhail Murashko to talk about this vaccine, but at the same time noted: "Although I know that it works quite effectively, it forms a stable immunity, I repeat: it has passed all the necessary tests."

The minister said that vaccine trials have shown high efficacy and safety of the drug. "All the volunteers developed high titers of antibodies to COVID-19. At the same time, none of them had serious complications of immunization," Murashko said.

The vaccine will be produced by the Gamaleya Center and Binnopharm. Murashko said that at the same time, with the assistance of the Ministry of Industry and Trade and the project office of Sberbank, "technical regulations are being worked out for scaling up production at the sites of a number of domestic manufacturers, there are such in our country."

The minister also said that on behalf of the head of state, the Russian Direct Investment Fund (RDIF) is investing in the production and promotion of the vaccine abroad. "A number of countries have already shown interest in it ( the vaccine )," the minister said.

"At the same time, the phased application of the vaccine in civilian circulation will begin. First of all, we consider it necessary to offer vaccination to those whose work is related to communicating with infected people. These are medical workers and those on whom the health of children depends - these are our teachers," said Murashko.