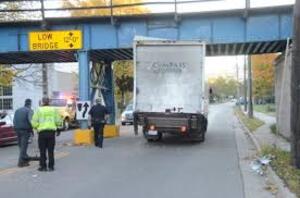 The New York State Police stopped 196 trucks and issued 50 tickets during a weeklong enforcement effort targeted at reducing the number of bridge strikes on state parkways and other roads with low bridges. The special enforcement detail, which ran from Monday, November 9 through Sunday, November 15, is part of an ongoing partnership between the State Police, the New York State Department of Transportation and the Governor’s Traffic Safety Committee to educate commercial vehicle drivers about the hazards of low bridges and how to avoid them.

State Police Superintendent Keith M. Corlett said, “State Troopers will continue to work with our state agency partners to reduce the number of low bridge hits, which are a safety hazard for motorists and lead to traffic disruption and property damage. Our collaboration on education and enforcement is an effective way to raise awareness and improve safety for all motorists.”

Department of Transportation Commissioner Marie Therese Dominguez said, "Keeping trucks and oversized vehicles off roads where they don’t belong makes our highways safer for everyone and helps prevent the needless delays and traffic jams caused when a bridge is struck. The Department of Transportation was proud to join with the State Police and our other partners in government in this important initiative that raised awareness about the dangers of bridge strikes and how they can be prevented."

DMV Commissioner and Chair of the Governor’s Traffic Safety Committee Mark J.F. Schroeder, said, "When a truck hits a bridge or tunnel, the damage can be significant, it snarls traffic, and can cause secondary crashes when traffic is suddenly stopped. That’s why enforcement and education campaigns like this are so important to make sure drivers know how to navigate New York’s bridges and tunnels safely and responsibly. GTSC looks forward to continuing our work with New York State Police and DOT to prevent these avoidable crashes.”

During the enforcement detail, Troopers focused on New York State Parkways and other roads where there have been documented bridge strikes by large commercial vehicles. Commercial trucks are banned on parkways, but operators guided by consumer-grade GPS devices can end up on parkways, and when that occurs a bridge strike is inevitable. Consumer GPS devices to do not include information about low bridges, truck drivers are required to instead use commercial-grade GPS systems which provide details about low bridges and restricted routes.

In the Capital Region, on November 13, a Trooper stopped a tractor-trailer on Glenridge Road in the town of Glenville, where a low-railroad bridge has been struck numerous times in recent years. Just two days later, another tractor trailer struck that same bridge.

Here is a breakdown of the tickets issued:

In addition to the enforcement campaign, a tip card and other materials were developed to educate drivers of box trucks and commercial vehicles about the hazards of low bridges and how to avoid them.

The educational materials will be made available to the public at highway rest areas, Department of Motor Vehicles Offices and truck rental facilities.