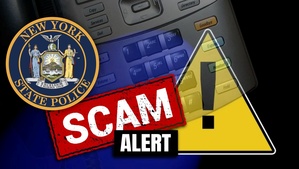 This past month the New York State Police in Columbia County have begun investigating multiple reports of the “Grandparents Scam”. These scams usually involve someone calling to claim that someone’s grandchild or other relative has been arrested (and a bail bondsman) needs to be paid immediately and in some cases an amount as high as $30,000.

In one recent case in Chatham, the victims left $12,000 outside of their house to be picked up by a “courier.”  Another case involved payments of cash to be sent through the mail hidden inside old magazines.

Another prevalent scam currently used attempts to convince the victim a relative was involved in a serious accident and money is needed for medical payments. These scams ask for large sums of money transferred in unusual ways devoid of any face-to-face interaction.  Once these thieves have extracted money they may also call back and try to get more.

The New York State Police offer the following tips to protect against the Grandparent Scam:

Additional information about the Grandparent Scam can be found on the Office of the Attorney General’s website. New Yorkers who have been targeted by this scam are urged to file a complaint by completing and submitting a Consumer Frauds and Protection Bureau online complaint form or by calling (800) 771-7755.