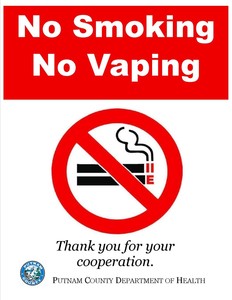 BREWSTER, NY— It has been a long road, but Tobacco 21 is finally law in Putnam County. The new legislation, which goes into effect early in 2019, makes it illegal to sell tobacco, nicotine and vaping products to anyone under the age of 21. Previously the legal age to buy these products had been 18. Putnam County joins 24 other New York State municipalities that have enacted Tobacco 21 laws.

County Executive MaryEllen Odell signed the bill into law earlier this week. She thanked the legislators for coming together on this issue, saying, “The health and safety of our young people has prevailed. It may have taken some compromising, but this is the right thing to do. Vaping is a significant problem in our schools. It has serious health consequences, and unfortunately many youth think otherwise.”

Debate on the bill, spearheaded by Garrison resident and County Legislator Barbara Scuccimarra, heated up last summer. The measure passed from the Health, Social, Educational and Environmental Committee, which Legislator Scuccimarra chairs. Lawmakers heard from numerous experts, as they spoke about both the health and business factors involved in the issue. Representatives from health advocacy groups including The American Cancer Society and POW’R Against Tobacco, offered not only evidence on the health risks of smoking tobacco at a young age, but also on the epidemic of teenagers who try and continue to vape. The business perspective was presented by the retailers’ trade organization the New York Association of Convenience Stores.

A number of local Putnam County agencies and organizations have been battling the war on tobacco and other addictions on many fronts. The One Army in the War on Addiction Task Force, chaired by Legislator Scuccimarra, brings together representatives from the County Executive’s Office, the Sheriff’s Department, the Department of Health, the Department of Social Services and Mental Health, and the District Attorney’s Office. Represented community organizations include The Prevention Council of Putnam, the Putnam Communities That Care (CTC) Coalition, Drug Crisis in Our Backyard, and CoveCare Center, as well as other provider organizations that tackle the addiction crisis daily.

At the recent Public Health Summit, research was presented by Kristin McConnell, director of The Prevention Council, which for many years has spearheaded local research and provides education on all forms of addiction. Ms. McConnell showed an alarming picture of Putnam County’s youth vaping numbers, which are double the national averages. The percentage of Putnam County tenth graders who used e-cigarettes (vaping) in the past 30 days is 27.3 percent, compared to the national average of 13.1 percent. For twelfth graders the national average is 16.6 percent and Putnam’s is at 33.8 percent. Another concern of The Prevention Council from their data is that 5.8 percent of teen e-cigarette users report using marijuana in the vaping devices, while 66 percent think the device, as purchased, holds just flavoring.

“That’s why this legislation is so important,” says Interim Health Commissioner Michael J. Nesheiwat, MD. “We had been winning the battle against teen smoking until vaping came along. This is a very sad story. People think vaping is safer than smoking cigarettes. The truth is that it is far from harmless. One of the inhaled chemicals, particularly in the flavored variety, has been linked to what is commonly called ‘popcorn lung.’ There is also ample research showing that among youth, vaping leads to a switch to tobacco cigarettes later on.”

When the bill came to a full legislative vote back in early September, it hit a bump as lawmakers voted 6 to 3 to table the measure. Among them was the Legislature Chairman Joseph Castellano, who explained that while he had been undecided, he was moving toward favoring the bill, saying, “I have teenage daughters myself so I can see value in raising the age. We need to work out the issues so we can get this on the books.”

Work it out they did: in early October Tobacco 21 passed with a solid 6 to 3 vote.

The Putnam County Department of Health, which currently conducts “compliance checks” to ensure that retailers are not selling tobacco to minors under age 18, is initiating a campaign to educate retailers and the public about the new law.

“We have approximately two months to get all establishments up to speed on this new law,” says Dr. Nesheiwat. “It’s a large undertaking, but it’s what we do—protecting the public’s health. It’s for the best—and now it’s the law.”