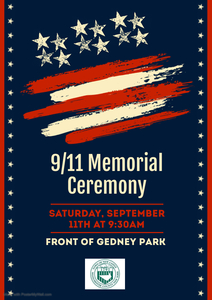 On Saturday, September 11, 2021, the Town of New Castle will be holding a memorial ceremony at Gedney Park to commemorate those lost on 9/11 and the heroism of both our first responders and all fellow Americans. For those of you who might be unaware, New Castle tragically lost residents and neighbors on 9/11. Their names, as well as the thousands of others, will never be forgotten.

On this 20th anniversary of 9/11, we have a great opportunity to reflect and have a little perspective of all that is going on in our respective lives, homes, workplaces, and communities. We must never forget the terrorist attack that not only stole too many lives on that day and years later, but indelibly altered and damaged so many others. Yet, as we honor these men and women, we must also remember that amidst the chaos and fear of the attacks and in the days, weeks, and months after, not only did strangers and friends unite together in ways many of us likely never saw before nor have seen since, but we witnessed unparalleled heroism and selflessness that even to this day has rarely been replicated.

Please join us on Saturday at 9:30 am to pay tribute to, honor, and remember the people and events of 9/11 including those here at home: Michael Berkeley, Donald Greene, Louis Steven Inghilterra, George Morell, and Allan Schwartzstein.

With great thanks to all the residents who made the memorial and commemoration possible, including the September 11, 2001, 20th Anniversary Memorial Committee, I wanted to share the 9/11 Memorial Booklet they prepared which includes stories and passages recognizing those from New Castle who passed, individuals who were in or around the WTC on 9/11, as well as those who were here in town. Please take a moment to read what our neighbors and friends experienced on 9/11 and the days that followed. Merely one of many people with their own story to tell, I share mine below:

I was a prosecutor in the Manhattan District Attorney’s Office drafting complaints in the early morning hours of September 11, 2001. When the first plane hit, I heard a loud boom but assumed a garbage truck was emptying the dumpsters on the street one floor below. A colleague told me a plane had struck the World Trade Center, about twelve blocks away, and I assumed it was an accidental Cessna collision. Nobody knew what had happened. Even the NYPD officers I was with were unfazed. Minutes later, a second boom reverberated through the building. It then became clear what had happened.

I walked outside and saw hundreds of people staring upward as debris, I think mostly papers and documents from the Towers, floated down. Some guy was screaming "they" just hit the Pentagon and were coming for the federal buildings and courthouse. Sirens wailed. Firefighters, along with police, correction, and court officers, jumped into action. I don’t recall how long I stood there, who I was with, or if I said a single word.

I went back inside, changed, found a colleague, and together we started to walk downtown to see if we could help. As we navigated the sea of people walking against us, the ground below me vibrated. Why were they running the subways, I asked myself? It was not the subways, however, that shook the concrete. One of the towers was cascading down upon itself. Time plays tricks on our minds and memory, but I recollect that in the mere minute it took me to walk around a building, one of the towers that was previously standing, had vanished.

As we walked past the fountain at Foley Square, gray and white frosted “zombies” shuffled up to clean themselves. My colleague received calls from his terrified girlfriend who was stuck in a nearby building as the dust cloud filled her office. He tried to calm her down, to no avail, before losing reception. Continuing toward the Twin Towers, about two blocks south of us the cloud billowed and began creeping through the streets. It became readily apparent that we were not equipped to enter the smog and could become a liability to others. Begrudgingly, we turned back, and along with more people than I could count, meandered uptown in a dazed and shocked state not able to fully grasp what occurred.

In the days that followed, access to lower Manhattan was blocked but I volunteered to process arrestees, so I was able to get downtown. Other than NYPD officers, firefighters, military personnel, and workers hoping to find survivors or recover those who passed, eerily silent darkness consumed the area. I vividly recall the acrid stench that hung in the air. The city seemed vacant and devoid of life. Except, it wasn’t. Leaving the office after 1 or maybe 2 am, I would see hundreds of rats, displaced by the turmoil, overwhelming the sidewalks, undulating like one serpentine being before disappearing into the grates due to my presence. As odd a comparison as it seems, with all the turmoil and violence of that day and those that followed, all I could think was that the will to survive and to find a path forward was alive and churning in every corner of New York City and in every breathing one of us.

I was not at Ground Zero on 9/11. Despite working downtown for twenty years since then, I still have not been to Ground Zero and don’t know if I ever will. I cannot pretend to understand the terror of those who were or agony of those who waited for loved ones they never heard from again. However, my memory of the fear, sadness, and horror will never be forgotten just as I will always remember the unity, courage, and compassion. I am reminded of life’s joys, even on 9/11, as I wish my boy a Happy Birthday every September 11th and as I think of the man I met in the elevator after Lucas’ birth. He had welcomed twins into the world six years to the day he escaped the attack on the Twin Towers.