Northern Westchester Rally for Gun Reform in Chappaqua on Saturday 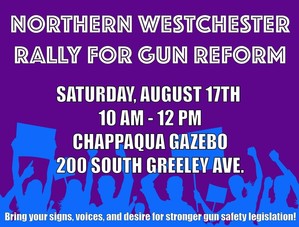 Join us on Saturday, August 17th, 10am – 12pm, Gazebo, downtown Chappaqua for the Northern Westchester Rally for Gun Reform

After Sandy Hook, we said never again. Since then, there have been over 2,000 mass shootings. We mean well when we follow the same script… shock, anger, grief and sorrow, thoughts and prayers, calls for action. Raise $ for the victims. Hashtag city name followed by strong. The list of communities torn apart by mass shootings keeps growing. And, after each mass shooting we ask, will this time be different? Will outrage compel political action, as it has done in other countries. Why wasn't Sandy Hook enough? Why wasn't the next shooting enough? What will be enough?

Nothing has changed. Being sad or mad is not enough. Those who are here are committed to end gun violence. We need each & every community to get involved NOW before their community is added to the list of communities that are victims. Let's start here, right now. Let's have our voices heard from this moment on. This isn't a party issue. This isn't politics. This is about life or death. This is about our children. This is about whether we are a civilized society that is willing to stop this ridiculous violence.

Log on to www.bradyunited.org. Scroll down and you can sign up for their newsletter for updates on gun violence prevention and safety. Let's speak to our neighbors, our friends, our relatives. Let's encourage everyone to take action. That’s how we will effectuate change. That’s the only way. Please join us as we mobilize the community in demanding stronger gun safety legislation be passed in Congress.