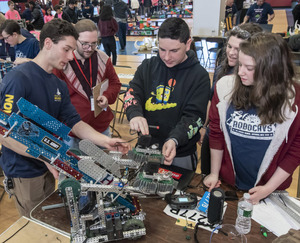 A team of Harvey School robotics students has won the top prize in the “Video of the Year” competition of the 2020 Create US Open Robotics Championship.

Although the COVID-19 pandemic forced the cancelation of this spring’s live-action championship competition sponsored by the Robotics Education & Competition Foundation, the video submitted by Harvey‘s RoboCavs robotics team C2789B was selected as the No. 1 entry from among 250 teams from all around the world.

Harvey seniors Michael Martirano, Bobby Gross, and Olivia Shore, sophomore Wendy Lichtenberg, and freshman Marley Shyer created and submitted their video introducing their team, demonstrating their robot's capabilities, and documenting their engineering process. The video was submitted months earlier before they knew the championship would be canceled.

"This award recognizes the hard work and dedication to excellence of Mike and his team," said Harvey robotics teacher John Wahlers. "Had the event been held, the video would have been the stepping-stone to major awards," he added.

Winning the 2020 video award is just one more feather in the cap of a highly successful Harvey robotics program, which, in just six short years, has produced several regional tournament wins, multiple awards for both excellence and design, world championship qualifiers, and a national championship in 2016 with RoboCavs team “A” winning it all and their schoolmates on team “B” finishing a close second.