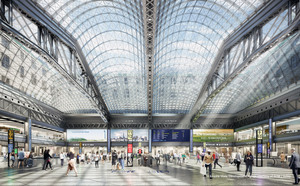 Named After the Late Senator Daniel Patrick Moynihan, New Train Hall in the James A. Farley Post Office Building will Provide World-Class Commuting Options while Honoring the Design of the Original Penn Station

Governor Andrew M. Cuomo today announced the Moynihan Train Hall, which the Governor first announced in his 2016 State of the State, will complete construction on December 31, 2020, with train operations beginning January 1, 2021. The 255,000-square-foot, $1.6 billion project transformed the more than 100-year-old James A. Farley Post Office Building into a modern, world-class facility that dramatically upgrades and redesigns America's busiest transit hub, increasing the existing Penn Station rail complex's concourse space by 50 percent. Thanks to Governor Cuomo's leadership, the train hall will open on time and on budget, despite the COVID-19 pandemic.

"New Yorkers have known for decades that Penn Station needed to be reimagined — and after years of work, the Moynihan Train Hall will open on time and on budget at the end of 2020," Governor Cuomo said. "This monumental accomplishment is a shot of hope as we come out of one of darkest periods in our history and sends a clear message to the world that while we suffered greatly as a result of this once-in-a-century health crisis, the pandemic did not stop us from dreaming big and building for the future. The new Moynihan Train Hall is the embodiment of New York Tough."

Improving Penn Station, the linchpin of the transportation network in New York and across the northeast, has long been considered one of the state's and the nation's most critical infrastructure priorities. The idea for a train hall in the James A. Farley Post Office Building first emerged decades ago — but was mired in bureaucratic delays and faced repeated federal inaction. Thanks to persistent leadership from Governor Cuomo, major construction on the project began in 2017 and proceeded on-time and on-budget.

Named for the late United States Senator Daniel Patrick Moynihan, a Navy veteran who represented New York State in the Senate for 24 years and championed the project, Moynihan Train Hall will house both Amtrak and Long Island Rail Road ticketing and waiting areas. All LIRR and Amtrak trains will be served by the seventeen tracks accessible from the train hall.

Despite the challenges of 2020, the project will be completed on time and on budget, thanks to the implementation of significant health safety protocols and innovative work schedules that kept workers safe. The $1.6 billion project represents a public-private partnership between Empire State Development, Vornado Realty Trust, Related Companies, Skanska, the MTA/LIRR, Amtrak, and the Port Authority of New York and New Jersey and was delivered via a design-build partnership.