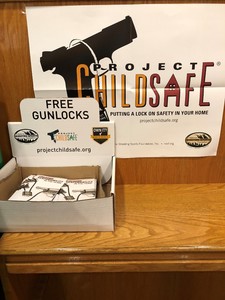 Did you know? The Town of New Castle has free gun locks provided by Project Child Safe. They are available in a display box next to the Med-return box in the police lobby.

In America, one out of three homes with children has a gun, and nearly 1.7 million children live in a home with a loaded, unlocked gun. Every year thousands of kids are killed and injured as a result. The ASK (Asking Saves Kids) Campaign - a collaboration between the Brady Center to Prevent Gun Violence and the American Academy of Pediatrics - promotes a simple idea with the potential to help keep kids safe. It encourages parents to ASK if there is an unlocked gun in the homes where their children play. It’s a simple question, but it has the power to save a child’s life.