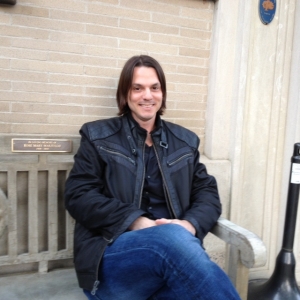 Editor's Note: Charlie Scopoletti will be playing his music Friday, June 27th, at the Captial Theatre in Port Chester. His journey to the stage is full of twists and turns, which he's soldiered through...one song at a time.

When Charlie Scopoletti was diagnosed with hodgkin's lymphoma at 10 years old, there was no Make-A-Wish Foundation. But there was a recreation room in the Pediatric Ward of the hospital that was full of toy musical instruments.

When Charlie laid his eyes on the drum set, there was no turning back. That hodgepodge collection of instruments gifted young Charlie with a departure from the harsh reality of cancer.

His time spent in radiation and chemo was full of daydreams about the drums in the rec room. He would count the minutes until he was free from the machines and iv- drips that consumed him, so he could bang away on the drums. Little did he know he was creating more than the joyful noise of a 10 year old boy innocently thumbing his nose at cancer ...he was actually laying the foundation for a career in music...way down the road.

As much as one would like to say, "the rest is history," in Charlie's case you have go through a few more hoops. As his journey was far from easy.

From Drumming to Dribbling

Charlie won his bout with cancer at age 10. Through his teen years, his interest in music kept growing, but so too was his athletic ability, especially in basketball. Soon he was off to college at Ohio University where he tested his basketball skills as a walk-on, and made the team.

But Charlie's hoop dreams would be quickly shattered when he broke his leg so severely, he had to quit the team just as soon as he made it. The doctor's told him the break was directly related to the weakening of his bones from his time in chemo and radiation.

The Beating of a Distant Drum

With his basketball dreams dashed, Charlie quit college and threw himself full time into music. He traded his drums for a guitar and began writing songs. Soon he was hired to play live shows and gigs and was booked solid performing for one audience after another.

He cut his first CD. He had fans. He was successful. College radio stations were playing his tunes. He was a young man livin' the musician's life. With his guitar and his songs, life was good!

But life has a way of blowing you back at times...

When he was 29, Charlie felt a lump in his throat. He was diagnosed with thyroid cancer. It robbed him of his voice. He could strum his guitar, but he couldn't sing.

At the same time he was diagnosed, his childhood best friend, Natalia, lost her 16 year battle with brain cancer. The destruction in his life caused by cancer seemed to be consuming him. But Charlie had a counter-punch to throw.

"Losing Natalia was the most powerful experience of my life," Charlie said recently in an interview with HamletHub. "After she died, I was laser-focused on what I should be doing." For Charlie that meant dedicating his music to lifting the human spirit, through songs with hopeful messages, drawn from life's adversity.

Within time, Charlie's thyroid was removed. The healing process began. Charlie beat cancer a second time...and before long he was singing once again.

After his full recovery, Charlie was performing in Newport, Rhode Island. There his story and talent caught the attention of a representative from the Make-A-Wish Foundation who was in the audience.

She asked him to write a theme song to perform at their annual gala.

Charlie sang his song to a live, packed audience of 800...but if you ask him he was really singing to an audience of just one, as he was joined on-stage by a six-year old girl, a Make-A-Wish recipient. She was the guest of honor that evening. And in a twist of fate, Charlie...the two-time cancer survivor...was singing for her.

Charlie's story is nothing short of amazing. So is his music. You can hear for yourself this Friday, June 27, as Charlie is set to perform with Duncan Sheik at the Capital Theatre, Port Chester, in a concert to benefit ... the Make-A-Wish Foundation.

For booking contact: This email address is being protected from spambots. You need JavaScript enabled to view it.

Editor's Note: Charlie has been in remission for 9 years. Keep singing Charlie!