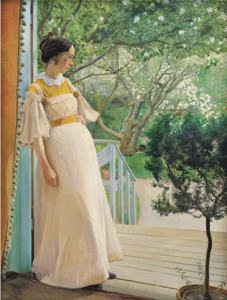 GREENWICH, CT – Following a five-month construction project, the Bruce Museum is pleased to reopen its newly expanded main art gallery with a major international exhibition: On the Edge of the World: Masterworks by Laurits Andersen Ring from SMK—the National Gallery of Denmark. Initiated by the American Friends of Statens Museum for Kunst, the national gallery of Denmark, the exhibition opens on Saturday, February 1, 2020, and will be on view through Sunday, May 24, 2020.

L.A. Ring (1854-1933), a Realist and Symbolist painter, ranks among the most significant figures in Danish art. The national gallery of Denmark holds the largest collection of Ring’s paintings and drawings. On the Edge of the World showcases 25 of his most important paintings, which represent the key themes, sheer variety, and complexity of his work. The exhibition travels to only two U.S. venues. The Bruce Museum is the only one on the East Coast.

Speaking about this first exhibition outside Scandinavia to be solely devoted to L.A. Ring, Mikkel Bogh, Director of SMK, says: “It is part of our mission at SMK to inspire and spark creative thinking by making the art of our collection known to a wider audience, which includes audiences outside the Nordic region. L.A. Ring was a sensitive and profound interpreter of the changing conditions of human existence at the threshold of modernity, in Denmark and elsewhere. We believe his painting has an appeal to U.S. audiences and that his works, while embedded within specific geographic and historical circumstances, speak to us today in a powerful artistic language that matters as never before.”

Laurits Andersen Ring was born into a smallholder family in the village of Ring in Southern Zealand, Denmark. As an artist, he never distanced himself from his humble origins. The two central themes of his art were the everyday struggles of ordinary people and the Danish landscape. Ring’s work reflects the great upheavals taking place in society and art in the decades around 1900. The processes of industrialization caused major changes in the labor market; new enterprises flourished, and people moved from the country to the cities, especially the burgeoning capital, Copenhagen. Denmark was on the way to becoming a modern society, and Ring was part of a larger effort by painters, authors, and theorists to create a uniquely Danish language of modernism.

Ring’s paintings capture this changing world, poised between traditional values and modernism. His early Symbolist paintings of people at work in the landscape are quiet and still, meticulously organized, and yet charged with a strong feeling of spirituality.

By the 1890s, Ring was regarded as Denmark’s greatest landscape painter. Landscape had deep symbolic associations at the time. Redistribution of the land at mid-century meant that Denmark changed from a society dominated by powerful landowners whose fields were tilled by serfs to one of smallholders who owned their own land. The land came to be seen as belonging to the people, and therefore to have an almost sacred, national aspect. Ring’s landscapes, rendered in a reduced color palette, capture a vast sense of space with remarkable precision and detail, bathed in crystalline northern light. His paintings of the Zealand topography come to form personal, atmospheric landscapes of the soul.

Ring’s paintings also tell of the joys and sorrows of his own life. His early work often has intimations of death, hovering just beyond the travails of this world. Happier themes, of closeness and intimacy, find their way into his work after 1896 when he marries the love of his life: Sigrid, eldest daughter of master potter Herman Kähler.

Finally, in the first decades of the 20th century, Ring painted a series of masterworks with large figures pushed close to the picture plane, often in postures of waiting. They seem trapped in a geometric web of modern signs – telegraph poles, the diagonal lines of fences, or receding railroad tracks – poised uneasily before an unknown future.

Although Ring lived in Denmark all his life, aspects of his art find parallels in the work of America’s great realists Winslow Homer, Edward Hopper, and Andrew Wyeth. All these artists combined a rigorous precision of design with a sense that deeper meaning lies just beneath the surface. All were keenly interested in how individual man handled the existential challenges arising as a result of the modern world.

On the Edge of the World: Masterworks by Laurits Andersen Ring from SMK—the National Gallery of Denmark provides an unprecedented opportunity for U.S. audiences to see the work of this great Nordic artist.

The Bruce Museum is grateful for exhibition support from Amica Insurance and a Committee of Honor Co-Chaired by Ellen Flanagan, Simone McEntire, Betsey Ruprecht, Patricia W. Chadwick, and Susan and Torben Weis. Honorary Chair is John L. Loeb Jr., former U.S. Ambassador to Denmark. Additional exhibition support is provided by the Charles M. and Deborah G. Royce Exhibition Fund and the Connecticut Office of the Arts.