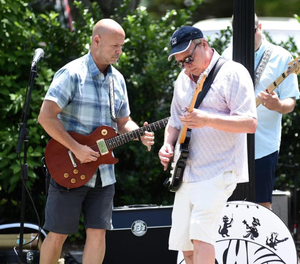 Free Music Fridays announces its July schedule of live music, free of charge and open to the public, every Friday from 12:30 to 1:30 pm at Greenwich Common in downtown Greenwich off of the Avenue.

Produced by Greenwich Forward, Re-Imagine Greenwich, and the Town of Greenwich Parks and Recreation, Free Music Fridays features local artists with different performers every week, appealing to various musical tastes. The series, which started last month on June 4, will run through September 3. Attendance has been growing every Friday, with a wide age range enjoying the music while picnicking on blankets and tables in the park. Several Greenwich Avenue restaurants are supporting Free Music Fridays by offering grab-to-go lunches as well.

"I applaud the collaborative efforts of Greenwich Forward, Re-Imagine Greenwich, and the Town of Greenwich Department of Parks and Recreation for creating a way to bring our community together every week," said First Selectman Fred Camillo. "The Free Music Fridays program is a perfect example of how Greenwich is evolving into an even stronger community. Music has the power of uniting us and raising our spirits as we celebrate this gradual return to normalcy. Free Music Fridays are weekly celebrations that highlight some of the qualities of life that contribute to what makes Greenwich a tremendous Town to live, do business, and to raise a family," Camillo said.

The performance schedule for July is as follows:

Molly & Jack decided to form a band almost two years ago. Molly is a sophomore at Sacred Heart Greenwich, where she sings in the choir, plays in the band, and performs in musical productions. Jack is a sophomore at GHS, where he plays guitar in the Jazz Ensemble and currently performs with the Lincoln Center Youth Orchestra. Molly & Jack are looking forward to playing some original songs in addition to their favorite classic rock and popular music.

Both Frank Rogers and Nick Fesko are born and raised in Greenwich and together have many decades of musical performance experience. The acoustic duo, along with Jason Fiorito on percussion, will perform various classic rock hits.

Tor Newcomer is a Greenwich native and popular local musician. He has been performing at venues in Greenwich and the surrounding area for over30 years. Tor plays a variety of classic rock and standards.

Gridline is a nationally recognized funk/soul and jazz/rock group comprised of top-notch musicians who have recorded with David Bowie, Living Color, and Frank Zappa. Their energizing style is Known to have caused dance addiction across the country.

Billy and the Shoeman is a four-piece acoustic-based band formed in 2015 and featuring Billy Foster, Bill Geoghegan, Ray Simonelli, and Jim McGrath. They cover classic rock, early R&B, and soul specializing in an acoustic environment.

Past performers have included Mark Zelenz, Billy G and the Boys, Cover story with Megan Tyre, and Frank Rogers and The Sound Cats.

The Free Music Fridays series is seeking Sponsors, which will include signage at the event. Each sponsor will have their name credited to underwriting the hour of music, in conjunction with Greenwich Forward, Re-Imagine Greenwich, and Parks & Recreation, and other Sponsors. Sponsors can have a table at the event to promote their business and hand out promotional material.