Details
Published on Saturday, 06 August 2022 13:36
Written by The Ridgefield Playhouse 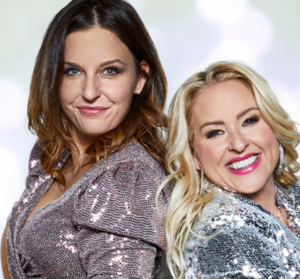 Has a long, hot summer with the kids left you craving a girls’ night out?  Mark your calendar and get ready for a hilarious mom’s night out as Kristin Hensley and Jen Smedley of #IMOMSOHARD talk about the things that no one will admit out loud, and laugh about all of the craziness that comes with being a mom!

#IMOMSOHARD takes The Ridgefield Playhouse stage with The Getaway Tour on Friday, October 7, 2022 at 8pm, part of the Barts Tree Service Comedy Series and Hearst Media Entertaining Conversation Series.  If this is your first introduction to #IMOMSOHARD, we’ve got two words for you:  you’re welcome!

#IMOMSOHARD (#IMSH) began as a popular web-series by these real-life best friends, comedians, and moms. With a camera, two husbands, a babysitter, and bottomless mimosas, Kristin and Jen shared openly about their fears and failures to prove that the only way to survive motherhood is through laughter and friendship. The video sparked an online community of 2 million. Each week, Kristin and Jen dish about the raw realities of motherhood – hemorrhoids, nipple hair, sex after marriage, mom bods, Spanx, and swimsuits. With 2.2 million followers, 300+ million views and 5 million Facebook Live views – these women cut loose like only moms can!  Grab your friends and tell your husbands not to wait up and see what everyone is raving about!  This show is for mature audiences only, 18 and over only.  Media sponsor for the event is STAR 99.9fm.

Kristin Hensley and Jen Smedley both write and produce the #IMSH series with a common goal: Maybe we can make you feel better about the job you’re doing if you see the terrible job we’re doing. The videos have received nearly 300 million views worldwide in just 5 years. The phenomenon that Kristin and Jen created has since been nabbed for development by Warner Brothers TV.

The comedians have sold-out two national tours, written a New York Times Best Selling book, landed branded deals with Fortune 100 companies such as Wal-Mart and Uni-Lever, and taped a standup comedy special for Amazon Prime Video, launching the network’s first standup comedy platform. They have recently premiered their weekly podcast and a children’s book series with Harper Collins. Kristin Hensley and Jen Smedley are both based in Los Angeles and can often be found selling pizza slices for the PTA or working as parking enforcement at school drop off.

For more information or to purchase touchless print at home ticket ($110 - $135) go online at www.ridgefieldplayhouse.org or, you can visit or call the box office (203) 438-5795.  The Ridgefield Playhouse is a non-profit performing arts center located at 80 East Ridge, parallel to Main Street, Ridgefield, CT and is committed to keeping the arts alive and available to all.