Details
Published on Sunday, 02 October 2022 14:20
Written by The Ridgefield Playhouse 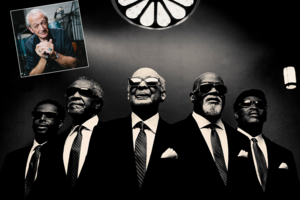 Editor's note: I had the pleasure of seeing The Blind Boys perform several years ago at The Ridgefield Playhouse. It was an unforgettable experience. And, I mean experience! The audience was dancing in the aisles. The band members (some of whom are blind) are gospel music legends whose rhythm and soul are not just heard but felt! Don't miss this show! Tickets HERE.

The Blind Boys of Alabama have the rare distinction of being recognized worldwide as both living legends and modern-day innovators of gospel music. The original members first sang together as kids at the Alabama Institute for the Negro Blind in the late 1930s, and the band has since persevered to become one of the most recognized and decorated roots music groups in the world. They have five Grammy Awards along with a Lifetime Achievement Award, and were inducted into the Gospel Music Hall of Fame in 2003.

On Thursday, November 10, 2022 at 7:30pm, they will bring their rich and timeless sound to The Ridgefield Playhouse along with special guest, 13-time Grammy Nominated electric blues harmonica player, Charlie Musselwhite. The show is part of the Moffly Media Evening of Art, Wine & Jazz Series, Sponsored by Faye & Jerry Walton. In the lobby prior to the show will be a complimentary wine tasting of Vionta Albarino and Orube Rioja with Ferrer Miranda Family Wines and an art exhibit by a local artist! Don’t miss the opportunity to experience this soulful and spiritual evening for yourself!

The Blind Boys of Alabama are recognized worldwide as living legends of gospel music, having attained the highest levels of achievement in a career that spans over 75 years. Known for crossing multiple musical boundaries with their remarkable interpretations of everything from traditional gospel favorites to contemporary spiritual material by songwriters such as Eric Clapton and Prince. They have appeared on recordings with many artists, including Lou Reed, Peter Gabriel, Bonnie Raitt, Willie Nelson, Aaron Neville, Susan Tedeschi, Ben Harper, Patty Griffin and Taj Mahal. Fans of HBO’s The Wire will recognize their version of Tom Waits’ “Way Down in the Hole” as the theme music on season one.

The original members first sang together as kids at the Alabama Institute for the Negro Blind in the late 1930s, including Jimmy Carter, who leads the group today. They officially became the Blind Boys of Alabama in 1944 and their 1948 hit “I Can See Everybody’s Mother but Mine” brought them success on both the recording and touring fronts, recording more than 50 albums and performing all over the world. They found mainstream success following their appearance in the 1983 Obie Award-winning musical The Gospel at Colonus, which was a smash hit Off-Broadway and on Broadway, starring actor Morgan Freeman. The Washington Post described seeing the Blind Boys of Alabama in concert as “part living history, part concert, all uplifting experience,” with the New York Times declaring “their sound remains rich and timeless.”

Charlie Musselwhite, more than any other harmonica player of his generation, can rightfully lay claim to inheriting the mantle of many of the great harp players that came before him with music as dark as Mississippi mud and as uplifting as the blue skies of California. He cut his (musical) teeth alongside Muddy Waters, Howling Wolf and everyone on the South side of Chicago in the early 1960’s. Charlie has been collaborating with the world’s finest artists for many years, including Ben Harper, Cyndi Lauper, Eddie Vedder, Tom Waits, Bonnie Raitt, The Blind Boys of Alabama, Gov’t Mule, INXS, Mickey Hart and Japan’s Kodo Drummers, George Thorogood, Eliades Ochoa, Cat Stevens and John Lee Hooker. He is decorated with awards, including 13 Grammy nominations, with a win in 2014 for “Get UP” with Ben Harper, and 33 Blues Music Award wins. More than 20 albums later, he is at the top of his game, a revered elder statesman of the blues nowhere near ready to hang up his harps, his depth of expression as a singer and an instrumentalist unexcelled and only growing deeper. Charlie Musselwhite is living proof that great music only gets better with age.

For more information or to purchase touchless print at home tickets ($70-85) online at www.ridgefieldplayhouse.org or, you can visit or call the box office for VIP Party Pass at (203) 438-5795. The Ridgefield Playhouse is a non-profit performing arts center located at 80 East Ridge, parallel to Main Street, Ridgefield, CT and is committed to keeping the arts alive and available to all.