Grammy Nominated Singer-songwriter and Activist Billy Bragg makes his only CT tour stop at The Ridgefield Playhouse on October 5! 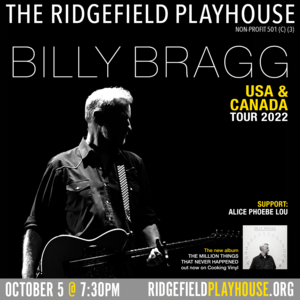 Singer songwriter and activist, Billy Bragg, is finally embarking on his long awaited tour of The USA and Canada, performing just 14 shows including The Ridgefield Playhouse on Wednesday, October 5, 2022 at 7:30pm. This highly anticipated performance is part of the Pepsi Rock Series Driven by North American Motor Car.

Best known for songs like “New England,” “Tanks Park Salute”, and “A Lover Sings,” his socially conscious lyrics of love and politics have stood the test of time. A two-time Grammy Award nominee for Best Contemporary Folk Album, he received both the Trailblazer Award at the inaugural Americana Music Association UK Awards in London and the Spirit of Americana Free Speech Award at the Americana Music Association US Awards in Nashville in 2016.

At their best, Billy’s songs present “the perfect Venn diagram between the political and the personal” (The Guardian), which can also be heard and felt in his highly praised tenth studio album, 2021’s The Million Things That Never Happened. Opening the show is Berlin-based South African singer-songwriter Alice Phoebe Lou. Having developed her bluesy, folk sound busking on the street, Alice has caught the ears of a community of music lovers the world over with her honest storytelling and raw, beautiful voice. Her song "She" from the film Bombshell: The Hedy Lamarr Story was included on the Oscars shortlist for Best Original Song in 2017.

Visit Bailey’s Backyard (23 Bailey Avene, Ridgefield) for dinner the night of the show and receive 10% off your bill when you show your ticket! Billy Bragg is a featured artist of media sponsor WFUV 90.7fm.

What has seen Bragg through 10 solo studio albums, 11 compilations, two box sets, six live albums and countless tours across countless international borders, has been a driving sense of compassion – what he himself christened ‘socialism of the heart’. He has always used his music platform to encourage change and engage his listeners to do so as well. This tour marks Bragg’s first North America dates since the highly praised 2021 release of his tenth studio album The Million Things That Never Happened on the Cooking Vinyl label.

“Among the million things that never happened were my planned US dates for the past three years, so I’m really looking forward to reconnecting with my audience and trying to make some sense of where we are after all this time. It will be great to be back out on the road playing songs in North America once again.” The Ridgefield Playhouse is fortunate to be one of only 14 dates on this tour so do not miss on your chance to witness Bragg in the Playhouse’s intimate 500-seat house!

For more information or to purchase touchless print-at-home ticket ($65 - $75) go online at www.ridgefieldplayhouse.org or, you can visit or call the box office (203) 438-5795.  The Ridgefield Playhouse is a non-profit performing arts center located at 80 East Ridge, parallel to Main Street, Ridgefield, CT and is committed to keeping the arts alive and available to all.