It’s a double Rainbow! TWO nights with Randy Rainbow at the Ridgefield Playhouse next week!

Details
Published on Thursday, 20 October 2022 17:27
Written by The Ridgefield Playhouse 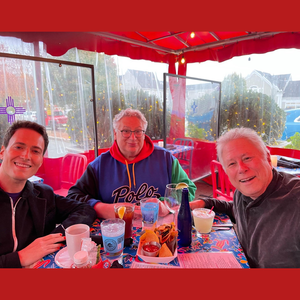 Internet Sensation, Comedian, Actor, Writer and Entertainer Randy Rainbow is making his return to The Ridgefield Playhouse! The New York Times best-selling author and four-time EMMY nominated satirist known for his popular YouTube series, The Randy Rainbow Show, will bring his new The Pink Glasses Tour to The Playhouse for not one but TWO nights- Wednesday, October 26, 2022 and Thursday, October 27 at 7:30pm. His show is part of the Teed & Brown Broadway & Cabaret Series and Barts Tree Service Comedy Series, Sponsored by The Gift MedSpa.

A Long Island native, Rainbow (yes, that’s his real name) started with his blog, The Randy Rainbow Bloggity BLAHg-BLAHg. In his early work, he staged fake phone conversations with famous people by editing real audio clips of those celebrities. His 2010 breakout video, “Randy Rainbow is Dating Mel Gibson” received more than 60,000 views in one week. Subsequent videos include “Randy Rainbow Calls Lindsay Lohan”, “Randy Rainbow Gets a Job (from Rachel Zoe?)”, “Randy Rainbow Kicks It with Kanye West”, and “Randy Rainbow Spends Christmas with Mel Gibson”. His videos were featured on popular blogs like Queerty and Perez Hilton.

But it was when he started shifting his focus onto the 2016 American presidential campaign that he really exploded onto the scene, gaining the attention of a larger audience. Rainbow did a series of spoof interviews and musical parodies skewering the election process and the candidates. Song parodies like "Braggadocious", "The Nasty Woman", "Fact Checker, Fact Checker", "The Russian Connection", and "Before He Tweets" have led to millions of views on his YouTube channel. For him, the interest and draw isn’t even in politics itself. “I don’t have a passion for politics, but I do have a passion for truth and justice. When I see people being attacked as they are now on a daily basis, I respond.” And the world responded back to him! These videos garnered him a huge fan following and endeared him to the Broadway community. Celebrities from Carole Burnett to Patti LuPone (who was featured on the parody "If Donald Got Fired"), Steve Martin and Martin Short, Alan Cumming, Andrew Lloyd Webber, Debra Messing, Lou Diamond Phillips, Audra McDonald, Ed Asner, Mark Hamill and Barry Manilow are all Rainbow fans! His musical talent, wit and charm were simultaneously the balm, the escape, and the humor needed to help the public get through the COVID lockdown. The unique absurdity and uncertainty of that time were captured in his parodies like “Cover Your Freakin’ Face”, “Social Distance” and “A Spoonful of Clorox” which currently has 7.4 million views on YouTube! Others include “Any Dem Will Do”, “Gee, Anthony Fauci”, “Kamala!”, and “Mr. Biden, Bring My Vaccine”.

This October, Rainbow was presented with the Matthew Shepard Foundation’s Making a Difference Award. During this acceptance speech at the ceremony he said, “If I’m able to make any difference in this world, I hope it’s reminding people to find the laughter and light, even in the darkest times….and to allow themselves the kind of unbridled freedom and joy that only comes with being the truest version of oneself.”

Before his performance at the Playhouse in 2021, he dined locally with Harvey Fierstein and Alan Menken at Southwest Cafe (109 Danbury Rd, Ridgefield.) (See photo.) This year, Southwest Cafe is the restaurant sponsor for this year’s performances. Head there for dinner before the show on either night and enjoy a complimentary margarita with your entrée when you show your ticket!