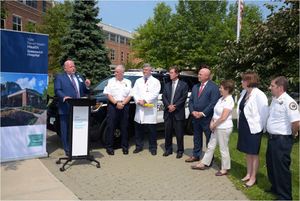 Greenwich Hospital on Monday announced that it has donated life-saving Narcan® nasal spray to the Greenwich Police Department to ensure every police vehicle is equipped with the medication used to revive opiate overdose victims.

“To have both our police officers and emergency medical responders able to administer Narcan in the field will give more people a fighting chance to recover from a potentially fatal overdose,” said Roth. “We are proud to partner with the Greenwich Police Department and GEMS and we will continue to work together to help combat this devastating illness.”

Narcan is sprayed into the nostril of opiate overdose victims to revive them. Opioid overdoses require immediate action; a matter of minutes can mean the difference between life and death.

“Greenwich is not immune to the scourge of drugs,” said Greenwich Police Chief Jim Heavey during Monday’s presentation. He said all marked police vehicles, three police boats and certain special police units, such as narcotics, will be equipped with Narcan.

Heavey said police used Narcan to help save a life within days after equipping police vehicles with the antidote. Eight drug overdoses have taken place in Greenwich in 2018 to date, he said, and a fatal overdose occurred last October.

So far in 2018, GEMS has administered Narcan 20 times, of which six cases were confirmed opioid overdoses, said Chris Tremblay of GEMS. The remaining 14 patients received Narcan as a diagnostic tool and had a negative drug screen at Greenwich Hospital, he said. GEMS administered Narcan 31 times in 2017, although some doses of the medication were given as a diagnostic tool and not for reversing an opioid overdose, he said.