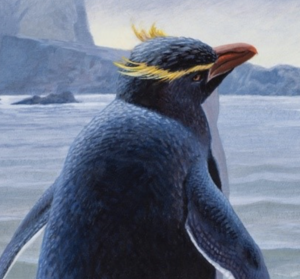 GREENWICH, CT – The raft of penguin species that once frolicked in the southern seas has grown, thanks to some modern sleuthing by DNA-tracking paleontologists. The fascinating finding of how the species came to be is tempered by its apparently abrupt demise following the arrival of humans to the isolated shores they inhabited for millennia.

In the study, published in the journal Molecular Biology and Evolution, an international team of researchers extracted mitochondrial DNA from subfossil bones discovered in sand dunes on the Chatham Islands, an island archipelago about 500 miles east of mainland New Zealand. By comparing the mitochondrial genomes of all living and recently extinct penguin species, the team established that the bones belonged to a new species of crested penguin and demonstrated that the formation of islands helped drive penguin diversification.

“The existence of a lost species had been suspected by Alan Tennyson (a co-author on the study), who previously examined penguin bones from these islands, but we needed DNA to test that idea,” says Theresa Cole, PhD candidate at Otago University in New Zealand and lead author of the study. The team named the new crested penguin species Eudyptes warhami, in honor of Dr. John Warham, who carried out pioneering studies on crested penguins in New Zealand.

That was not all the bones had to say, however. “The study also turned up a complete surprise – revealing that some smaller bones also collected at the site belonged to a dwarf subspecies of the yellow-eyed penguin,” says Cole. The team classified the dwarf penguin as Megadyptes antipodes richdalei, in honor of the late Dr. Lance Richdale, an expert on modern yellow-eyed penguins.

“These are magnificent fossils, combining beautiful skeletal preservation with intact DNA,” says Dr. Daniel Ksepka, Curator of Science at the Bruce Museum and a co-author on the paper. “They tell a cautionary tale, for this crested penguin species persisted for two million years only to be snuffed out in the blink of an eye. The dwarf yellow-eyed penguin reveals a different kind of tragedy -- it seems to have started on its way to becoming a distinct species, but had its evolutionary journey cut short before it had the chance.”

The penguins appear to have been wiped out when humans arrived in the thirteenth century and began hunting them for food. “Evidence suggests Eudyptes warhami vanished from the Chatham Islands soon after humans arrived,” says Cole. “In fact, some of the bones we studied were found in middens, representing leftovers from cooking sites.”

A major finding from the study is that many penguin species appear to have arisen soon after the emergence of recently formed islands, such as the Chatham Islands, Antipodes Islands, and Galápagos Islands. Cole notes: “From an evolutionary perspective, it’s fascinating to understand how and why species evolve. We were able to provide a framework for exploring these questions, and demonstrated for the first time that islands may have played a key role in penguin evolution.”

Why the link to islands? “Penguins need environments free of land predators to lay their eggs and raise their chicks,” says Ksepka. “As new islands formed due to volcanic activity or sea level change, penguins set up new breeding colonies. After thousands of generations of returning to the same islands each year, a population of penguins could become genetically distinct and split into a new species.”

Ksepka hopes that the new study will serve as a reminder of the need for conservation efforts. “For a long time, we thought penguins escaped the wave of human-driven extinctions that wiped out birds like the dodo, which disappeared in the seventeenth century, and the Great Auk, which became extinct in the mid-nineteenth century,” Ksepka says. “Finding evidence that these penguins perished should remind us that we need to be even more careful with the species remaining under our stewardship.”