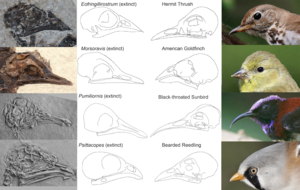 GREENWICH, CT – Paleontologists have identified two new extinct bird species that were the first to evolve finch-like beaks. Fossils of the new species, named Eofringillirostrum boudreauxi and Eofringillirostrum parvulum, were discovered in Wyoming and Germany. The exquisite fossils date to 50 million years ago, a time when both regions were covered by subtropical forests.

The study, to be published in the February 18, 2019 issue of the journal Current Biology, demonstrates that these species were among the earliest members of the perching bird group (Passeriformes). Perching birds are the world’s most species rich-bird group and include many familiar backyard birds such as sparrows, chickadees, and crows. The two Eofringillirostrum species are part of an extinct family named Psittacopedidae that evolved an impressive array of beak specializations, only to go extinct and be replaced by more modern perching birds.

“This discovery is remarkable because it reveals that the Psittacopedidae evolved all types of feeding specializations in the distant past, only to go extinct and be replaced by modern species,” says Dr. Daniel Ksepka, Curator of Science at the Bruce Museum and lead author of the study. “In a way, modern perching birds re-invented the wheel – or more accurately, re-evolved specialized beaks.”

Whereas the finch-like beak of Eofringillirostrum evolved for feeding on small seeds, this extinct species also had close relatives with very different specializations, including slender-billed species which drank nectar, and others that probably had a mixed diet consisting of fruits and invertebrates. All species of the Psittacopedidae seem to have gone extinct by 30 million years ago, whereupon modern perching birds like finches, sunbirds, and thrushes took over the same ecological roles.

The early success of Eofringillirostrum and its relatives raises the question of why these unique birds ultimately died out. “One major difference between the fossils and modern perching birds is the foot structure”, observes co-author Dr. Gerald Mayr of the Senckenberg Research Institute in Germany. “In Eofringillirostrum and its relatives, the fourth toe is reversed and forms a grasping foot. Even though the significance of this adaptation is not yet fully understood, a similar foot type occurs in many living birds that nest in tree cavities. Modern perching birds, by contrast, have a dazzling variety of nesting strategies, which may have contributed to their evolutionary success.”

The Fossil Lake site in Wyoming and Messel site in Germany are considered two of the world’s most productive fossil deposits, and the team hopes they will continue to yield new surprises.

“Complete fossil birds are exceedingly rare but are crucial to understanding the role extinct species played in the ecosystem,” says co-author Dr. Lance Grande of the Field Museum. “Discoveries like these have kept me returning to Fossil Lake in Wyoming year after year.”