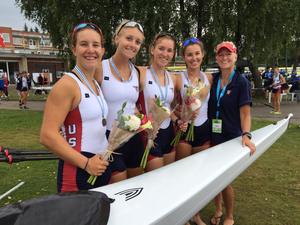 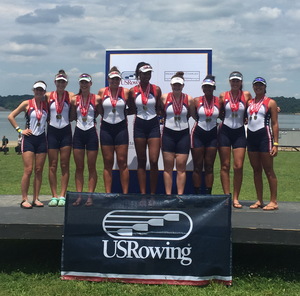 Elite Connecticut Boat Club (CBC) athletes competed this summer at the USRowing 2017 Club Nationals in Bethel, Ohio (July 12-16), CanAmMex in Victoria, BC, Canada  (July 7-8) and Junior World Championships in Trakai, Lithuania (August 2-6) and won gold, silver and bronze medals which has been an exciting end to the 2016-2017 crew season for this all girl Connecticut based team.

Below are more details:

GOLD MEDAL: Heidi Jacobson of Greenwich and Jenna Macrae of New Canaan were the stern pair of the U19 8 that came in first place.

GOLD MEDAL: Heidi Jacobson won gold in the U178.

SILVER MEDAL: Catherine Garrett of Darien won silver in both the U19 8+ and the Intermediate 8+.

BRONZE MEDAL: Heidi Jacobson won bronze in the U17 4-.

BRONZE MEDAL: Third time medalist, Kaitlyn Kynast of Ridgefield, won a bronze medal in the 4-.  This race had the largest number of entries in history of the Junior Worlds. Kaitlyn Kynast, having finished her final season with CBC, is now a rising Freshman at Stanford University where she will continue her rowing career.

SILVER MEDAL: Julia Abbruzzese of Darien and Ridgefield was in the U19 National Team spare 2- that finished 2nd to Germany in the race of team spares.

Want to join the CBC team?  Join us for our annual fall tune-up/tryout camp

August 28th -August 31, 3:45-6:15 in Norwalk. This camp is open to all female athletes including non-rowers.  Please visit our website for more details.