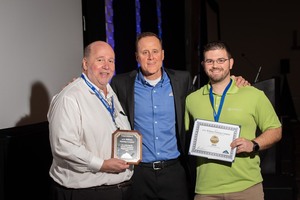 Summit, the flagship program of NCG, based in Conshohocken, Pennsylvania, is a national peer group of top painting and building trades companies. The rigorous criteria for Summit Community Engagement certification include donating time, money and effort giving back to community partners. NCG, one of the premier business coaching and consultancies in the country, requires extensive documentation before bestowing this award.

“Summit members believe in being good neighbors,” said Brian Nolan, managing partner at NCG.  “We believe in doing well by doing good. A. G. Williams is one of our most successful members and the contributions they have made to the community is a large part of their success.”

Founded in 1906, A. G. Williams is a full-service professional painting contractor with a long history of helping others. For years, the company conducted its work without fanfare, supporting a baseball league in the Dominican Republic and serving on the board of directors at local churches, for example.

Prior to the internet, company employees helped organize and sponsor local little league teams by going door-to-door, calling businesses and writing letters seeking sponsorships and other support. They also bought pizza and ice cream after games and awarded the plagues. A. G. Williams also assisted countless people in need and donated services and funds to worthy causes.

But during the company’s centennial in 2006, A. G. Williams decided that it could increase its impact by publicizing their endeavors to encourage others to follow suit and increase donations to the causes it championed.

In 2018, A. G. Williams donated more than $100,000 in painting services to charitable endeavors – including the victims of an arson attack in White Plains, Holy Trinity Greek Orthodox Church in New Rochelle and Church of Archangels in Stamford – along with another $43,000 to support local non-profit organizations. That puts the total amount of donations since 2006 at $1.2 million.

Company owners Art and George Williams also encourage employees to engage in community service and volunteerism. Many of these projects go unnoticed because the main goal is not to wave the flag of righteousness but to do what’s best to help those in need.

For example, co-owner George Williams serves on several church boards of trustees, donates to veterans groups and supports the Shriner’s Hospital for Children. Paul Viggiano, director of marketing, is encouraged to coach boys and girls hockey and lacrosse teams in New Rochelle and to work with the LUNGevity Foundation to help fight lung cancer.

In addition, A. G. Williams is in the process of establishing the 501C3 nonprofit A. G. Williams Foundation, which will serve as a conduit for donations to worthy community causes and provide scholarships to members of Holy Trinity Greek Orthodox Church along with company workers and their families.

“For decades, giving back has been the backbone of our company culture,” said co-owner George Williams, the grandson of founder Arthur G. Williams. “We approach our community outreach the same way we take care of our employees and serve our clients with professionalism.”