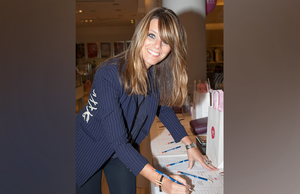 Yonni Wattenmaker was honored in the July issue of WAG magazine as one of Fairfield county’s most fascinating women. This was to the delight of many and surprise of none.

As BCA’s President, Mary Jeffery said, "Breast Cancer Alliance is delighted to see Yonni recognized in such an important and visible way”. “We’re also not surprised to find her included alongside other highly successful women: Yonni is a strong, powerful and respected leader, advocate and role model. Her impact in the world of breast cancer—as well as in her own community—is significant and admirable.”

Cited for their “dedication, tenacity, self-belief, altruism and passion” by the area’s leading lifestyle publication, the 40 honorees include esteemed women, such as Eileen Fisher, Glenn Close, Hillary Rodham Clinton, Vanessa Williams and Fran Weissler.  Chief among the attributes Wattenmaker and her notable cohorts share is a commitment to enrich the communities in which they live.

Since joining the Greenwich-based Breast Cancer Alliance (BCA) in 2011, Wattenmaker has worked tirelessly to advance the organization’s mission to improve survival rates and quality of life for those impacted by breast cancer. Under her leadership, BCA has awarded $6,975 million to advance critical, novel, early-stage research, 24 breast surgery fellowships at Society of Surgical Oncology accredited institutions, and provided 98 education and outreach grants to health organizations for regional screening, treatment and dignified support for the underserved.

“The great strides made by Breast Cancer Alliance are due in great part to the relationships we build within communities,” Wattenmaker explained. “BCA was founded by six women and is now supported by hundreds of devoted volunteers, donors and breast cancer survivors. These committed women, men and teens have helped make BCA one of the leading non-profit, non-corporate breast cancer foundations in the U.S.

“To be recognized as one of WAG’s 40 Fascinating Women of 2018 for my part of this extraordinary organization, and to be named among such esteemed and powerful women, is an incredibly gratifying and humbling honor,” Wattenmaker remarked.