Fred Elser First Sunday Science at the Seaside Center: The Last of the Shark Hunters 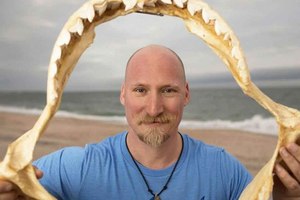 Fred Elser First Sunday Science at the Seaside Center: The Last of the Shark Hunters: How Trophy Fishermen Pushed Science into Action

Keith Cowley, shark advocate and Curator of the Living Sharks Museum, will discuss the legacy of legendary shark sport fisherman Captain Frank Mundus. His capture of a massive great white shark using only rod and reel is said to be one of the inspirations behind the film Jaws. The decades of shark hunting that followed resulted in the decimation of a species, finally halted by the fierce efforts of a scientific community determined to build a case to save the “man-eaters.”

This is the story of their feats. The Bruce Museum’s Seaside Center, located in Greenwich Point Park, hosts family programs on the first Sunday afternoon of each month. Admission to the Seaside Center is free. Alert the front gate staff if you are attending the First Sunday Science Program.