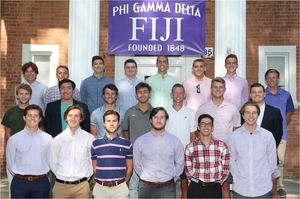 Peyton Larkin of Cos Cob, CT, a member of Ohio Wesleyan University's Theta Deuteron chapter of the Phi Gamma Delta (FIJI) fraternity, is among the brothers recently earning the 2018 Jordan Bowl for having highest comparative scholarship among the nation's 147 FIJI chapters.

This marks the Ohio Wesleyan chapter's second national award in two years. The men also earned the 2017 Owen Cup for most improved scholarship.

"We pride our chapter on developing new members into active members that have a personal understanding of their priorities during their undergraduate years at OWU with scholarship being one of the most important," said Rajotte, a pre-medicine and pre-professional zoology double-major and chemistry minor.

"I am so proud of the men of Phi Gamma Delta," said Rutkowski, who also serves as director of the Student Involvement Office. "This is such an accomplishment and serves to defy some of the stereotypes of fraternity men.

"FIJI's award also provides the Office of Fraternity & Sorority Life with an opportunity to congratulate the entire Greek community for consistently - and for many, many years - attaining a GPA higher than their non-Greek peers."