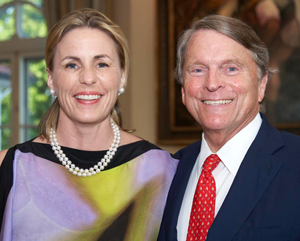 Award to be Conferred at Reception Honoring Landmarks Recognition Recipients

David F. Ogilvy will be granted posthumously with the Historical Society’s first annual David Ogilvy Preservation Award to recognize major accomplishments for lifetime work dedicated to the advancement of historic preservation in Greenwich. The award will be presented to Anne Ogilvy and family at the Historical Society’s Annual Meeting on September 30th which also will honor recipients of the Landmarks Recognition Program.

David Ogilvy (1942 – 2020) was a leading force in Greenwich real estate with a career that spanned more than 40 years up until his death last year. As president and owner of David Ogilvy & Associates, he was instrumental in burnishing the town’s upscale image through marketing many of its most distinctive and sought-after homes. He was passionate about preservation and devoted considerable time and resources to the conservation of historic houses and properties. An active member of the Advisory Council of the Greenwich Historical Society for 13 years, Ogilvy was also a former trustee and president of the Greenwich Land Trust and a longtime supporter of the Greenwich Tree Conservancy.

“It is a privilege to acknowledge David’s tremendous contribution to preserving Greenwich’s unique architectural heritage by creating this award in his honor,” says Historical Society CEO and Executive Director Debra Mecky. “His relentless efforts to ensure Greenwich maintains its distinctiveness and high quality of life, especially at time when historic homes and other notable structures are fast disappearing, has set a high bar and an admirable example for the community. He was a cherished friend who left a very large footprint in Greenwich.”

Landmarks Recognition Program Honors Structures Associated with Trailblazing Women
The brave women who fought for the passage of the 19th Amendment granting women the right to vote inspires the Landmarks Recognition Program honorees. Originally planned for 2020 to coincide with the 100th anniversary of the Amendment, the rescheduled program recognizes four Greenwich structures owned, designed, or dedicated to highly accomplished women. Each of the properties will receive a plaque in recognition of their design excellence and value in preserving Greenwich’s architectural legacy.

Mary Tyler Moore’s fieldstone home where she lived with her husband, Dr. S. Robert Levine, up until her death in 2017, is among the properties. Others include Innis Arden Cottage, designed by K. C. Budd, Greenwich YWCA’s mid-century modernist building, and a spectacular multi-winged Tudor dwelling in Rock Ridge.

“It’s an honor to recognize enterprising women and the structures that often helped them succeed,” says Robin Kencel, chairman of the Landmarks Recognition Program. “The properties represent very different styles and periods, which are reflective of Greenwich’s rich historic past and dynamic architectural landscape.”

The Landmarks Recognition Program has presented plaques to more than 300 structures since its inception 34 years ago, with a goal of promoting pride in ownership and the preservation and adaptive use of distinctive properties. Unique to Greenwich, the landmarks designation ensures these structures secure their rightful place in the town’s history.