Building Better Lives in Greenwich: A Safe-Distance Success at the Celebratory Ribbon Cutting

Details
Published on Wednesday, 17 June 2020 16:32
Written by The Housing Authority of the Town of Greenwich 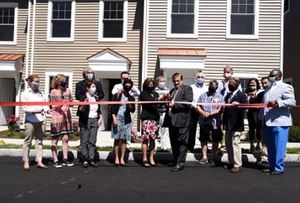 Building Better Lives in Greenwich: A Safe-Distance Success at the Celebratory Ribbon Cutting of the New Townhouses at Armstrong Court

This past Saturday morning’s Ribbon Cutting Ceremony was a celebration of the rejuvenation of Armstrong Court, both for the buildings and the people who live there. The new townhouses are the beginning of a transformation, helping to make Greenwich more of a blended community, full of opportunity for all. There are 18 new construction townhouses contained in 6 buildings representing Phase 1 of the overall Armstrong Court redevelopment project and were open for attendees to tour.

Town and State Officials were among the 100+ safely distanced attendees. Several of them spoke with pride at the accomplishments. "This is a transformative step toward the future of affordable housing for the Town of Greenwich, helping residents to shape their lives productively and create new beginnings," said Anthony Johnson, Executive Director of the Housing Authority. "We are committed to providing the opportunity to live in quality, affordable housing through fiscally responsible asset management of our resources, and these 18 units are an exceptional example of our capabilities."

"Greenwich is a wonderful community, and it is very diverse. It is expensive to live here, so affordable housing is crucial to our community, but it also critical that we get it done right. Sam, Tony, and the Commissioners have done it right,” praised First Selectman Fred Camillo. As for the new townhouses themselves, Camillo called them "a point of pride for not only the Town, but here in Chickahominy. Keep doing what you are doing; you’ve got a lot of support."

Former First Selectman Peter Tesei also remarked. He championed the revitalization of Armstrong Court and has a personal attachment to the neighborhood. Both of his parents grew up nearby on Alexander Street. "This particular community has endured through 70 years, and while it had served a valuable purpose, the current accommodations certainly were not what they should be for any community. So today really begins a renewal that is transformative. It speaks well to the Housing Authority, its Board of Commissioners, and the support from the State of CT."

Tesei commended the HATG for what they do for the residents; "It is not just the buildings. It is what you are doing for the people who are living in the buildings, and that's the key that we certainly all should remember. This is an uplift in the sense of pride in the community. This is really transforming the neighborhood in what is a renaissance."

The Commissioner of Housing from the State of Connecticut Seila Mosquera-Bruno congratulated the Housing Authority's efforts and promised future support: "The Department of Housing invested $3.4M in these homes; and will continue supporting your development efforts. We have funded phase II and III, so that you can continue your work, we don't want you to stop. Mosquera-Bruno recognized the need in the community; 'We need more homes like these, affordable to families with limited incomes. We all know how difficult it is to build homes with affordable rents, especially in Fairfield County; however, the completion of phase one shows that it can be achieved."

The Commissioner explained the need for affordable housing in the State of Connecticut in both urban and suburban communities "to ensure that CT residents can choose where to live, regardless of income. To reach that goal, now more than ever, we need to work together; we need to take care of each other since we are all facing a common thread, COVID19, a virus that does not discriminate. We have slowed things down considerably over the past few months, and yet this project came to fruition, even during these difficult times."

The Connecticut Housing Finance Authority (CHFA) CEO Nandini Natarajan praised the work of HATG: "In turbulent times, it is heartening and hopeful to see people moving into homes that will be places of peace and sanctuary." Natarajan went on to recognize the transformational impact the new homes will have; "2020 has not provided many opportunities to celebrate. However, today we are celebrating the first phase of a development that is a confident step forward to the future. You are creating a vibrant community here where people can build the lives they want, celebrate their milestones, and plan for their futures."

A considerable amount of support from the State of CT, CHFA, and DOH was also cited by Natarajan: "Armstrong Court is a significant investment for CHFA. In the first 3 phases, CHFA is investing more than $16 million in Tax-Exempt Bonds. However, we are not alone in our investments. CHFA is one member of a strong financial partnership assembled by the Housing Authority of the Town of Greenwich. Our partners at DOH are also making a significant investment (of $12.2 million) along with Enterprise, the tax credit syndicator, who purchased the Low Income Housing Tax Credits (of $18.1 million in federal 4% and 9% LIHTCs). In addition, there are other private investors, and Eversource, that purchased state tax credits and provided energy rebates."

The new unit mix includes six two-bedroom units and 12 three-bedroom units, with 1 ½ bathrooms in each. The units were constructed on previous underdeveloped land and under Energy Star standards with energy efficiency features. The first 18 units will serve as replacement housing to ease the relocation and rehabilitation logistics of the second phase. Phase 2 will include the gut rehabilitation of Buildings #1, 3, and 6 and expected to begin in late summer. Each construction phase is slated to take 12 months. Residents will be shifted within the complex while the units are gutted and rehabilitated. After each phase of construction is complete, residents are moved into the newly refurbished units. The next phases of the redevelopment project will combine the current one-bedroom and two-bedroom units to produce more three-bedroom, two-bathroom units, which are in higher demand for families.

Sam Romeo, Chairman of the HATG Board, is proud of the new construction. “This represents the future of the HATG, with plans to build nearly 300 units, increasing affordable housing in Greenwich. This is important for everyone, making Greenwich a more attractive place to build and to thrive in our neighborhoods. We are moving forward into a very bright future. I thank everyone who helped us along the way. ”

The existing buildings at Armstrong Court were originally constructed in 1951 as a 144-unit family development contained in six buildings. With the addition of 18 new units in the first phase and rehabilitation of the buildings, the total redevelopment will result in 150 units, an increase of 6 units.

The Housing Authority of the Town of Greenwich was the developer of the new construction. Charles E. McDonald served as the architect with A. Vitti Excavators as General Contractor. HATG will serve as Property Manager, as it has considerable experience in managing affordable housing.

This HATG project serves moderate-income households and is conveniently near public transportation. When the project is completed, it will vastly improve the quality of life for so many Greenwich residents. Upgrades in affordable housing instill pride in place, and residents tend to take better care of their homes, have better stability and health, and children can perform better in school. Adding to a better life for all people in Greenwich, the Town has also invested in the Greenwich Pool and rejuvenation of Byram Park, which is nearby. Through Family Centers, the Armstrong Court Preschool offers School Readiness classes for income-eligible families with children ages 3-5 years. The preschool also houses the Greenwich Head Start Program; both are sponsored by HATG.

As the Housing Authority of the Town of Greenwich improves and expands, its mission now is more broadly defined than the conventional notion of brick and mortar as the primary focus. They eagerly encourage a sense of community, purpose, and personal growth, helping residents to shape their lives productively. Working in unique collaborative partnerships that tap a multitude of resources available within the Greenwich community and from state and federal organizations, the Housing Authority has implemented a broad-based group of support services to strengthen family life, foster stable home environments, drug-free living, independence, and self-sufficiency. Many of these initiatives are through the auspices of local agencies and organizations.

There are 837 units in 15 properties under the HATG, including home-ownership condominiums, scattered-site housing, various developments, and Parsonage Cottage. The Housing Authority also administers 343 families through the Section 8 Program. Total residents served through all programs is 2,574. Through resident associations and with the help of professional staff and outside support agencies (e.g., CCI, Family Centers, Department of Human Services, Commission on Aging), residents are encouraged to learn, earn, manage and improve their lives.

Refreshments and a variety of delicious breakfast offerings at the Ribbon Cutting Ceremony were safely provided by Dom Delfino, who brought his food truck, Joey B’s.