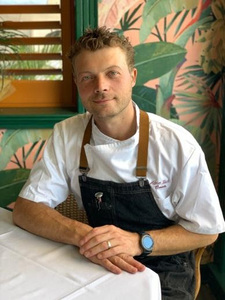 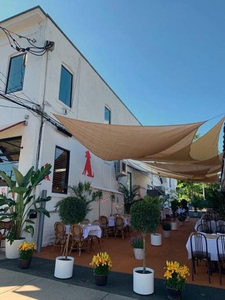 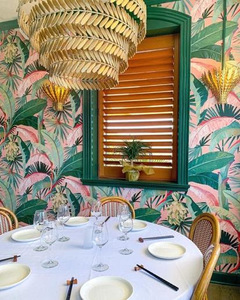 Antoine Blech, restaurateur and co-owner of Le Penguin and Le Fat Poodle, has opened his new French-Vietnamese bistro, Orienta, for dining. With his son Adrien Blech in the helm as executive head chef, the new restaurant is located at 55 Lewis Street in Greenwich, next door to Le Penguin.

Orienta was set to open in late March when the pandemic hit and shuttered restaurants throughout Connecticut. Faced with the possibility of being permanently closed before they could first open, the Blech family decided to open just for takeout. In the first months of operation, they worked with a small team, including Antoine’s wife Suzanne and Adrien’s wife Kate in the front of house, to offer a small menu of French-Vietnamese specialties to the community.

“We never dreamed we would open a restaurant with takeout-only. Aside from all the difficulties, it gave us the opportunity to test the menu and get guest feedback in those first weeks,” said Antoine. “It’s wonderful now to be able to finally open the doors and welcome everyone to our new restaurant!”

Orienta was Antoine’s first venture launched in Manhattan’s Upper East Side circa 1995, honoring the cuisine of Southeast Asia. He was inspired by his experience as maitre’d of Le Colonial, and also from working at the classic French bistros Le Relais, Le Bilboquet and Le Comptoir, all in New York City. Antoine’s vision was to take Vietnamese haute cuisine and marry it to the simpler style of the French bistro – et voila, Orienta was born! Today it has come full circle 25 years later, opening in Greenwich, CT.

Orienta is both a homecoming and formal launch for young Executive Head Chef Adrien Blech. Adrien trained alongside Chef Eric Ripert over four years first at Blue, Ritz Carlton Cayman Islands and then the three-star Michelin Le Bernardin. After traveling in France, cooking in Paris under Chef Gabriel Grapin, at Guy Savoy in Las Vegas, then in Los Angeles as executive chef at Soho House, Adrien was ready to return home to open the new Orienta with his family.

The menu pivoted easily to takeout in its early days and has now expanded for dining on Orienta’s terrace and in its evocative dining room. The food is inspired by classics of Vietnam and its history, with focused flavors and spices, sourcing the highest quality ingredients locally in New England.

The staff follows all CDC guidelines for safety and health, with constant sanitation, and tables are spaced six feet apart.