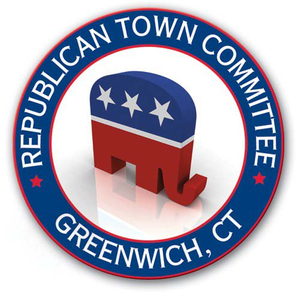 “[We are] so very fortunate to have such a dedicated and effective team to represent Greenwich at the State Capitol,” states Richard DiPreta, Chairman of Greenwich RTC. “Senator Scott Frantz and State Representatives Mike Bocchino, Fred Camillo and Livvy Floren are intimately connected in our community and fight tirelessly for their constituents every day. This session they successfully passed a bi-partisan budget as the minority party in the House; with a budget that includes no tax increases and no tolls. We are proud to once again nominate this team as the Republican candidates for State Senator and State Representatives. They are exactly the candidates we need to pull the State of Connecticut out of the fiscal crises created under the Malloy administration.”

Greenwich RTC Republican Nominees for CT General Assembly: Senator L. Scott Frantz, 36th Senatorial District is seeking reelection for his sixth term. Senator Frantz is the Deputy Senate Republican Majority Leader of the Senate Republican Caucus and serves as Co-Chair of the Commerce Committee and the Finance, Revenue and Bonding Committee where he contributes to ongoing efforts to help Connecticut businesses succeed, protect jobs, promote employment and balance state budgets. Getting Connecticut’s fiscal house in order remains one of his most significant priorities. Senator Frantz is also Vice-Chair of the Government, Administration and Elections Committee and a member of the Transportation Committee.

A business entrepreneur with a long history of service and commitment to his community, Frantz has presided on corporate boards for more than 30 years and also serves on several local nonprofit boards and club organizations. Senator Frantz lives in Riverside with his wife and their four children. He looks forward to continuing to represent the communities of Greenwich, New Canaan, and Stamford, Connecticut. Learn more about Scott: www.frantzforstatesenate.com

“I am honored to have the trust of the voters to run again for the 36th District Senate seat and was very happy to accept the nomination at the Convention. Along with the Delegation, we have made incredible strides forward in the last few years to reverse decades of poor decision making with regards to the State’s fiscal stability, budgeting practices, and contract negotiations. If re-elected, I will continue as Co-Chair of the Finance, Revenue and Bonding Committee to work across the aisle as I have always done in the past to generate bipartisan solutions to our fiscal challenges. We have an outstanding leadership team with two Republicans and two Democrats on this Committee and will continue to work together as harmoniously as we have in the past if we are all reelected.”

State Rep. Livvy Floren, 149th District of Greenwich and Stamford, is seeking her tenth term. Livvy currently serves as Ranking Member on the Bonding sub-committee and is also a member of Finance, Revenue, and Bonding, as well as the Insurance and Real Estate committees. Livvy also continues to serve as Assistant Republican Leader. Learn more about Livvy: www.oliviafloren.com

"As I seek re-election, my goals are: To serve my constituents in Greenwich and Stamford with reasonable, reliable results and to remain accessible and responsive. My legislative priorities include lower and more predictable taxes, job creation, preservation of open space, protection of the environment, improved mass transportation, and the elimination of unfunded and costly mandates and regulations. It is an honor to be a State Representative; it's a wonderful job, and you have to count your lucky stars when you have it. Trust me; I've been counting."

State Rep. Mike Bocchino, 150th District of Greenwich, is seeking re-election for his third term. Mike serves as the Ranking Member of the Labor and Public Employees Committee and also sits on the Housing, and Energy and Technology Committees. A lifetime resident of Greenwich, Mike is a product of the Greenwich public school system and continued his education at Sacred Heart University in Fairfield, CT. Mike served as President of the PTA for the New Lebanon School for three years and is a founding member of the Greenwich Preservation Trust, where he served as Treasurer of the executive board. In addition to his role as State Representative, Mike is currently a consultant for MSB Advisors and is a substitute teacher in the Greenwich Public School district. Mike resides in Greenwich with his wife, Shannon, and their two sons, Michael Jr. and Sean. Learn more about Mike: www.electbocchino.com

“I am humbled and honored that the Greenwich Republican party has once again endorsed my candidacy for state representative of the 150th district. As Republicans we have made great strides in Hartford producing bi-partisan budgets, phasing out the estate tax, capping spending and avoiding tax increases and tolls. There is so much more work that needs to be accomplished to create a sound, fiscally conservative economy. An economy that will attract new businesses to our state, allows those business already here to flourish and most important creates jobs and a future for our residents so that they and their children can and will remain in this beautiful state.

State Rep. Fred Camillo, 151st District of Greenwich, is seeking reelection for sixth term. Fred serves as a member of the Commerce, Executive and Legislative Nominations, and Higher Education and Employee Advancement Committees. Camillo is dedicated to advocating for public safety, consumer protection, commerce, and animal welfare initiatives in Greenwich and beyond. Fred grew up in the Cos Cob section of Greenwich and is involved in many community nonprofits including, Boys & Girls Club of Greenwich, Greenwich Boy Scouts, Greenwich Old Timer's Athletic Association, Donna Marie Camilo Leukemia Walk, and many more.

“We need to restore our beloved state to the prominence it once held and away from the reputation it has acquired as the state people flee from. Rep. Camillo said. The structural reforms we fought for and that became part of the 2017 budget is only a beginning; and must be continued if Connecticut is to turn this ship around. It has been the greatest honor of my life to serve the people of my home district and to be their voice in the People's House in Hartford and I hope to continue that service for another term.”