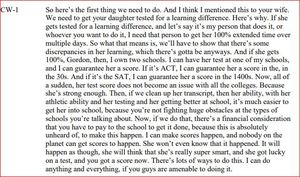 The buzz around the country today is focused on a college admission cheating scandal that involves celebs parents  Felicity Huffman and Lori Loughlin and many high-worth  CEOs including Greenwich resident and attorney, Gordon Caplan.

According to a sworn Affidavit by Special Agent with the FBI, Laura Smith, Caplan and others are charged with conspiracy to commit mail fraud and honest services mail fraud, in violation of Title 18, United States Code, Section 1349.

Smith’s criminal complaint states,”I have probable cause to believe that the defendants conspired with others known and unknown: (1) to bribe college entrance exam administrators to facilitate cheating on college entrance exams; (2) to bribe varsity coaches and administrators at elite universities to designate certain applicants as recruited athletes or as other favored candidates, thereby facilitating the applicants’ admission to those universities; and (3) to 3 use the façade of a charitable organization to conceal the nature and source of the bribe payments.”

Several court-ordered wiretap conversations incriminated Caplan. An excerpt of one is below:

CW: So here’s the first thing we need to do. And I think I mentioned this to your wife. We need to get your daughter tested for a learning difference. Here’s why. If she gets tested for a learning difference, and let’s say it’s my person that does it, or whoever you want to do it, I need that person to get her 100% extended time over multiple days. So what that means is, we’ll have to show that there’s some discrepancies in her learning, which there’s gotta be anyways. And if she gets 100%, Gordon, then, I own two schools. I can have her test at one of my schools, and I can guarantee her a score. If it’s ACT, I can guarantee her a score in the, in the 30s. And if it’s the SAT, I can guarantee her a score in the 1400s. Now, all of a sudden, her test score does not become an issue with all the colleges. Because she’s strong enough. Then, if we clean up her transcript, then her ability, with her athletic ability and her testing and her getting better at school, it’s much easier to get her into school, because you’re not fighting huge obstacles at the types of schools you’re talking about. Now, if we do that, there’s a financial consideration that you have to pay to the school to get it done, because this is absolutely unheard of, to make this happen. I can make scores happen, and nobody on the planet can get scores to happen. She won’t even know that it happened. It will happen as though, she will think that she’s really super smart, and she got lucky on a test, and you got a score now. There’s lots of ways to do this. I can do anything and everything, if you guys are amenable to doing it.