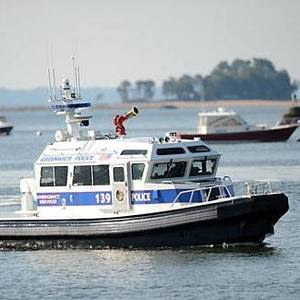 On Saturday Greenwich Marine Police received a call from boaters that there was a person in the water in distress in the area of Calf Island. Upon arrival, officers discovered a man in the water being kept afloat by a passing boater who was in the water with him keeping his head above water. Officers removed the subject from the water and transported him to shore where he was taken to the hospital.

An investigation determined that the man was fishing on his own when he fell overboard. After an extended period of time treading water he was discovered by passing boaters. His boat was taken away by the wind and currents and later located near Port Chester NY waters.

As of late Saturday the man’s condition was starting to improve.

Each year hundreds of lives are lost... thousands are injured... and millions of dollars of property damage occurs because of preventable recreational boating accidents on U.S. waterways. The U.S. Coast Guard estimates that life jackets could have saved the lives of over 80 percent of boating fatality victims. Accidents can, and do happen with terrifying speed on the water. There's rarely time to reach stowed life jackets.