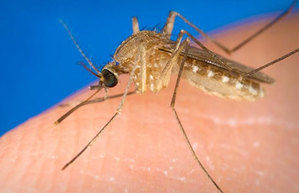 “We are seeing increases in the number of mosquitoes carrying West Nile virus with expansion into new locations," said Dr. Philip Armstrong, Medical Entomologist at the CAES. “We have also detected eastern equine encephalitis virus from two towns in southeastern CT, however the highest level of activity continues to be in the Pachaug State forest in Voluntown.  Both viruses are expected to build-up in the mosquito population in the coming weeks and months ahead."
"The continued warm humid weather enhances mosquito biting activity and heightens the risk of acquiring West Nile virus and eastern equine encephalitis virus infection," said Dr. Theodore Andreadis, Director of CAES.  "We will continue to monitor the situation closely with increased mosquito trapping and testing and urge residents throughout the entire state to take simple measures to avoid mosquito bites such as using mosquito repellent and covering bare skin, especially at dusk and dawn when mosquitoes are most active."
West Nile virus is the most common mosquito-borne viral disease in the United States and reemerges every summer in Connecticut. One hundred fifty-seven human cases of West Nile virus, including 4 deaths, have been diagnosed in Connecticut residents since 2000.
Eastern equine encephalitis is a rare but serious mosquito-borne viral disease in people and horses. On average, there are 6 human cases reported each year in the United States. The mortality rate of hospitalized patients is one-third and approximately one-half of survivors suffer from permanent neurological damage. In Connecticut, outbreaks of EEE have occurred sporadically in horses since 1938 and the first locally-acquired human case and fatality was reported in the fall of 2013.

The response to mosquito transmitted diseases in Connecticut is a collaborative inter-agency effort involving the Department of Energy and Environmental Protection (DEEP), the Connecticut Agricultural Experiment Station (CAES) the Department of Public Health (DPH), the Department of Agriculture and the Department of Pathobiology at the University of Connecticut (UCONN). These agencies are responsible for monitoring mosquito populations and the potential public health threat of mosquito-borne diseases.
The CAES maintains a network of 92 mosquito-trapping stations in 72 municipalities throughout the state. CAES begins mosquito trapping and testing in June and continues into October.   Positive findings are reported to local health departments and on the CAES website at https://portal.ct.gov/caes.
For information on WNV and other mosquito-borne diseases, what can be done to prevent getting bitten by mosquitoes, the latest mosquito test results and human infections, visit the Connecticut Mosquito Management Program web site at https://portal.ct.gov/mosquito.
*Image courtesy CDC.gov