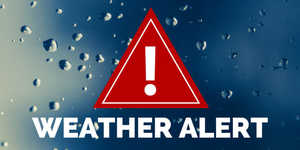 At 11:00 AM Tropical Storm Isaias was located near 26.9 N 79.6 W or approximately 120 miles south southeast of Cape Canaveral, Florida. Isaias has maximum sustained winds of 65 MPH and is moving to the north northwest at 8 MPH.

The National Hurricane Center (NHC) is forecasting that Isaias will brush the east coast of Florida today into Monday morning as strong tropical storm. Isaias is then forecast to turn to the north northeast and impact eastern North Carolina Tuesday morning.

Isaias is then forecast to move up along the east coast and thru central Connecticut Tuesday evening as a tropical storm.

On the official forecast track our state can expect tropical storm conditions with sustained winds of 45 – 55 MPH and gusts in the 50 - 65 MPH range especially in eastern CT Tuesday evening. The most likely timing for the tropical storm force winds is from 6:00 PM Tuesday evening until just after midnight. This timing may still change somewhat as we get closer to the time of impact.

The primary threat from Isaias continues to be from the fairly strong winds. Based on the current NHC forecast we can expect a moderate impact to trees and powerlines. The storm will also likely be accompanied by heavy rain of 4” – 6” especially in western CT. Minor to moderate coastal flooding is also possible (closest approach now appears to be 3 hours prior to high tide) which may inundate many some low lying coastal roads and a few structures. Limited stream flooding is also possible along with moderate urban flooding.

The Department of Emergency Services and Public Protection Division of Emergency Management and Homeland Security will continue to closely monitor hurricane Isaias. The next update will be sent at 6:00 am Monday morning.