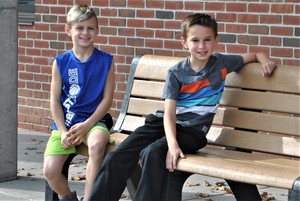 In response to devastation early last month from the worst hurricane in Bahamas history, Pembroke elementary school fourth-graders J.D. Andrews and Alex Ascone took it upon themselves to organize a fundraiser that collected more than $1500 to help the victims.

To start the effort, the boys set up buckets in each of the schools’ classrooms and urged their classmates to donate pennies to the cause. J.D. and Alex made announcements explaining the fundraiser and encourage competition. In just four days, the “penny wars” resulted in a sizeable donation to be sent to the American Red Cross.

Hurricane Dorian left hundreds of people missing and many more without homes, water or food. The Pembroke students felt even though the islands were a thousand miles away, they could still ease the burden of those impacted.

“It was devastating because it was going only five miles per hour,” J.D. said. “They need stuff to survive right now. They can build houses later, but now they need food and water.”

They are in the process of writing a letter to the American Red Cross to be sent with the donations.

“It’s important to save people’s lives,” said Alex. “It’s working together just a little bit to make a difference.”