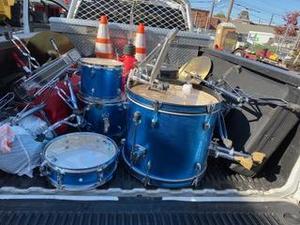 The Kiwanis Club of Greater Danbury made two donations of dozens of instruments to Danbury Public Schools in October as part of its new initiative: “Kiwanis is INSTRUMENTAL in Children’s Lives.”

The donations included trumpets, a trombone, a flute, electric bass, drum sticks, electric keyboards, electric and acoustic guitars, a drum set and a ukulele. The DPS music department will distribute these instruments among eight district schools.

In 2019, the district was named a 2019 “Best Communities for Music Education School District” for its commitment to and support of music education by the nonprofit National Association of Music Merchants (NAMM). Danbury was one of 623 recognized school districts nationwide and 18 in Connecticut.

Jill Russell-Benner, the DPS K-8 music department head, serves as the liaison between schools and nonprofit organizations and has been instrumental in getting funding to the schools specifically for music education.

Last year the district received more than $140,000 in instruments and supplies from VH1Save the Music Foundation, and $40,000 from NAMM. Efforts continue through the district to make certain that eventually all K-8 students will have access to musical instruments and education.

The Kiwanis Club will kick off its instrumental initiative at Ridgefield Playhouse on Sunday, Nov. 24.