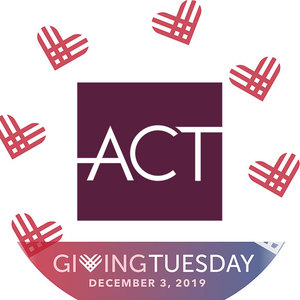 Ridgefield, Conn. (December 3, 2019) - Today is Giving Tuesday and ACT of Connecticut wants to remind you about this important day of giving. As we approach the end of the year, non-profit organizations here in Ridgefield count on your financial support now more than ever.

Giving Tuesday is a global generosity movement, unleashing the power of people and organizations to transform their communities and their world. Giving Tuesday will kick off the generosity season this year by inspiring people to give back on December 3rd, and throughout the year.

ACT (A Contemporary Theatre) of Connecticut is a nonprofit 501(c)(3) Equity theatre located in Ridgefield, CT. Founded and led by Katie Diamond, Daniel C. Levine, and Bryan Perri, ACT of CT presents limited engagement runs of well-known Broadway musicals and plays, as well as world-premiere productions by the next generation of writers and composers. ACT of CT was honored with 11 BroadwayWorld Connecticut Awards in 2018-2019, its inaugural season. The theatre company produces four shows per season, including one show in the “Presenting Stephen Schwartz!” Series (honoring ACT Artistic Advisor, Stephen Schwartz). All shows feature both Broadway stars and local Fairfield and Westchester County talent. In addition to fully produced main stage productions, ACT of CT hosts a New Works Series, The Broadway Unplugged Series, youth education classes, masterclasses, camps, workshops, and a conservatory program for high school students. ACT of CT is located at 36 Old Quarry Road, in the beautiful village of Ridgefield, CT.  Visit actofct.org for further information.