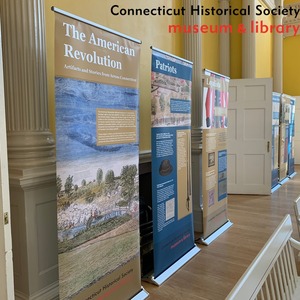 Now through Oct 21, Connecticut’s Old State House in Hartford will host a traveling exhibit from the Connecticut Historical Society Museum and Library. “Connecticut in the American Revolution” is a series of banners featuring the story of fervent patriots, heroic spies, and divided loyalties.

This exhibit, consisting of images and text on six pop-up banners, highlights treasures from the Connecticut Historical Society collection that reveal the people and events that helped influence the war and shape the new nation. From the diary of hero-spy Nathan Hale of Coventry, to the bullet-ridden hat of 71-year old soldier and casualty Phineas Meigs of Madison, to a rare surviving red coat owned by Munson Hoyt, a loyalist from Norwalk, the artifacts pictured in the exhibit help preserve and bring to life the stories behind Connecticut’s role in the war for independence.

Visitors to the Old State House will see the exhibition in the historic Senate, which features a Gilbert Stuart portrait of George Washington. During the Revolution, an earlier state house stood where the current Old State House now stands. In 1780, Generals Washington and the French General Rochambeau met on that spot for the first time, forging a relationship that helped bring the French into the war at a critical moment that resulted in American victory at Yorktown. On Saturday, September 24, the Governorś Foot Guard will commemorate that meeting with music and a volley on the Old State House lawn.

Connecticut’s Old State House is a National Historic Landmark building which served as a home to all three branches of Connecticut state government from 1796 to 1878. Museum exhibits highlight some of Connecticut’s most important stories of freedom, democracy, and civic action, from the Amistad and Prudence Crandall trials to the Constitutional Convention of 1818.  Today, Connecticut’s Old State House is operated by a public/private partnership between the Connecticut Office of Legislative Management and The Connecticut Democracy Center.  It currently serves as a history museum, gathering spot, and place of civic exploration for thousands of local, national, and international visitors each year. For hours and admission rates, visit ctoldstatehouse.org.

The Connecticut Democracy Center (CTDC) provides people with a lifetime pathway to active citizenship and the tools to take civic action in their own communities. The CTDC seeks to inspire people of all ages to engage in civic life and strengthen their communities. Learn more at ctdemocracycenter.org.