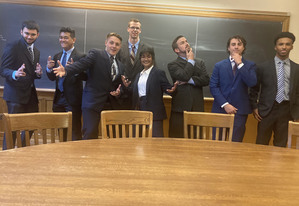 Four Western Connecticut State University two-student teams participated in the American Moot Court Association Elm City Regional held at Yale University last weekend and performed so well that one team will advance to the nationals in Baton Rouge, Louisiana, in January. It’s a Cinderella story in the making.

Moot Court Adviser and Associate Professor of Justice and Law Administration Thomas A. Miller said, “Eight of our finest students went toe-to-toe with some of the most elite schools in the country at Yale this past weekend, and they were more than up to the challenge. They spent six months preparing for this tournament, and it showed. They were poised, professional and brilliant. Three of our four teams advanced deep into the tournament, and every team won at least once. Our best team, which consisted of Mason Peragine and Brandon Pancoast, finished third overall and secured an extremely coveted berth in the national championship tournament that will take place on Jan. 14 and 15 at LSU.

“This is the equivalent of making it to the NCAA Division 1 Basketball Tournament — only the top 64 teams in the country make it,” Miller explained. “Making it to this tournament is incredibly difficult and is traditionally the province of much larger schools. It is objectively true that our students represent one of the elite moot court teams in the entire country. In the round that determined who made it to the national tournament, they defeated a team from Yale.”

The American Moot Court Association Regional Tournament was a two-day competition with each team arguing both sides of a hypothetical Supreme Court case focusing on the 4th and 8th Amendments three times on day one, with the best teams advancing to day two to take part in an elimination bracket tournament. Of WCSU’s four teams, three advanced to the second day, facing students from Yale, the University of Southern California, the University of Chicago, William & Mary, Georgetown, Cal. State Fullerton and Meredith College.

Brandon Pancoast and Mason Peragine: JLA-Legal Studies majors Pancoast, of New Milford, and Peragine, of New Fairfield, won all of their rounds on the first day and were the top-ranked team heading into day two. In the first round on day two, they defeated one of WCSU’s other teams to advance. “Defeating one of our own teams was incredibly bittersweet,” Miller said. “It is definitely a symptom of our success. though. We did so well that our teams were basically forced to play each other on day two. They narrowly lost to a team from the University of Chicago in the semi-finals. It should also be noted that the University of Chicago is currently the top-ranked moot court school in the country and that the team that we essentially statistically tied made a deep run at nationals last year and went on to win the tournament at Yale this year.”

Derrick Tavares and Vince Diesta: Tavares, of New Fairfield, is majoring in Business. Diesta, of Brookfield, is a Financial Accounting major. “Both are 19-year-old sophomores with no prior competition experience, yet they reached the second day of the tournament,” Miller said. “They only lost on the first day to the team from the University of Chicago that ended up narrowly beating Brandon and Mason. Unfortunately, they ran into the Chicago team again on the second day of the competition and lost. I expect big things from them next year.”

Aakanksha Koppisetti and Kyle Maysonet: Koppisetti, a Criminology major from Ridgefield, and Maysonet, a Legal Studies major from Bronx, New York, were WCSU’s final team to make the second day. “They performed well on the first day, but they had the misfortune of having to face the buzzsaw that is Brandon Pancoast and Mason Peragine,” Miller explained. “Although they put up a fight, Brandon and Mason got them in the end. They were incredibly gracious to and supportive of their teammates despite the situation. I couldn’t be prouder of them as a coach.”

John Decker and Brandon Muckerman: Decker, of Kent Lakes, New York, and Muckerman, of New Milford, are both pursuing degrees in Law Enforcement. “John and Brandon put up a good fight, and they narrowly missed the second day,” Miller said. “Unfortunately, the moot court ball didn’t bounce their way. That doesn’t change how hard they worked and how much they both improved as the semester went on. They were incredibly gracious to and supportive of their teammates despite missing the second day. I’d go to battle with them again 11 times out of 10.”

The National Tournament at Louisiana State University will be held in two months, and fundraising efforts to support the team’s travel to Baton Rouge are underway. Miller said, “Only the best teams in the country qualify, and most come from a handful of well-established and well-funded programs. It’s nearly unheard of for a team from a small public university to get to the nationals. Our students have overcome adversity every step of the way, and it never slowed them down. All eight of our students deserve to be congratulated and celebrated. This triumph belongs to us all.”

In keeping with Miller’s propensity for sports analogies, Cinderella is going to the ball.