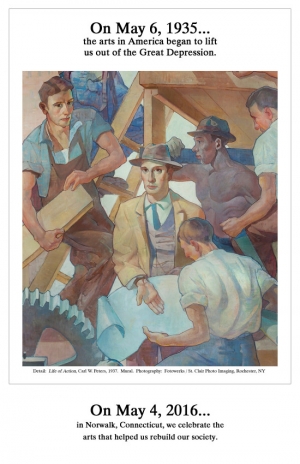 In May 1935, as part of the great return-to-work effort known as the Works Progress Administration (the WPA), President Franklin Delano Roosevelt returned Americans back to work in the service of the rebuilding of a society staggering under the weight of the Great Depression.

Under the Federal Art Project of the WPA, these workers included artists, writers, actors, and musicians; for Roosevelt believed that in order to lift ourselves out of economic stagnation we would also need to rebuild the culture of America at the grass roots level.

On Wednesday, May 4th at 6:30pm, Norwalk Community College will screen “Enough to Live On: The Arts of the WPA” as the concluding film in its Movies-of-the-Month free film series. Ashford, Connecticut independent filmmakers Michael Maglaras and Terri Templeton of 217 Films will introduce the film and take questions following the screening.

“Enough to Live On” tells the story of how Franklin Roosevelt and the New Deal moved art in America out of the rarified atmosphere of the elite and brought it directly to the American people as an inspiration and catalyst for change and recovery in the 1930s.

“Roosevelt’s vision for the WPA is as relevant today as it was then, ‘We are trying to construct a more inclusive society.  We are going to make a country in which no one is left out,’” said Susan Wallerstein, chair of the Norwalk Arts Commission.  “When people think of the WPA, they usually think of visual arts.  In fact, the WPA supported many art forms – from music to dance to live theatre.  This film includes an example of WPA theatre, including film footage of the performance.”

“Enough to Live On” features more than 70 works of art from this period, including notable works by Rockwell Kent, Dorothea Lange, Stuart Davis, and Reginald Marsh, as well as rare footage of WPA artists at work.

The section focused on Harlem includes the groundbreaking work of the great muralist Aaron Douglas; introduced with the poetry of Langston Hughes and featuring a composition by African American composer William Grant Still and an appearance by the remarkable blues singer Juanita Hall.  View a clip at this link: https://vimeo.com/120514423

Diane Jellerette, Executive Director of the Norwalk Historical Society, noted that while nationally many pieces of WPA art have been lost or destroyed, “Norwalk has saved and conserved over 50 murals, many of which are in Norwalk City Hall.  There are a number of restored murals in most if not all towns and cities in Fairfield County.  Norwalk has one of the largest collections of restored WPA murals in the United States.”

Excerpts from the film can be viewed at this link: https://vimeo.com/two17films.

WHAT:  Screening of 217 Films’ “Enough to Live On:  The Arts of the WPA”
Connecticut filmmakers, director Michael Maglaras and executive producer Terri Templeton, will introduce the film and take questions following the screening.

COST:  Free and open to the public

About 217 Films:  217 Films is an independent film company located in Ashford, Connecticut. “Enough to Live On: The Arts of the WPA” is the sixth film by director Michael Maglaras and executive producer Terri Templeton.

In ten years of filmmaking, and by employing a concept which he originated -- the idea of an “essay in film” – Maglaras has asked us to stop, look, appreciate and recognize the importance of our collective American cultural life through films about artists as diverse as Marsden Hartley, John Marin and Lynd Ward, and events such as the world-changing 1913 Armory Show and the arts of the American Depression.

Maglaras and Templeton hold the distinction of having been invited to present four of their films at the National Gallery of Art in Washington, D.C. where the Director of Film, Peggy Parsons, has described their work as “virtuoso filmmaking.”

The Sacramento Bee called Maglaras a film maker of "Bergman-like gravitas." His films have been described as "virtuoso filmmaking" (National Gallery of Art) "alive and fresh" (Art New England) "elegiac and insightful" (Naples Daily News) "unforgettable" (Journal of American History) and “comparable to that of the widely acclaimed Ken Burns” (New Britain Herald).

In December 2016, 217 Films’ new documentary titled “America Rising: The Arts of the Gilded Age.” will be released. This film highlights the arts of the American renaissance…what Mark Twain described as “The Gilded Age.”