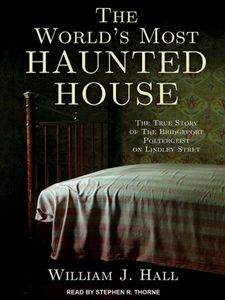 Connecticut author William J. Hall will speak at the Danbury Library on Saturday, October 21 at 12:30pm to relive the forgotten case of a terrifying incident involving the Goodin Family in Bridgeport, Connecticut and a malevolent poltergeist.  The case quickly gained international attention, along with that of paranormal investigators Ed and Lorraine Warren who were assisted by a priest and a young seminary student.

In November 1974, police and fire authorities were summoned to a house on Lindley Street in Bridgeport, where they encountered bizarre occurrences, including moving furniture, flying pictures and a floating refrigerator. The story was picked up by local and world media.

What makes this case so unusual was that it wasn't just one person or family, but also members of the fire and police departments who witnessed the ghostly activity. Their official reports describe things like rattling furniture and a small girl being slammed against the wall.

The blockbuster movie "The Exorcist" had been released less than a year before, and thousands of onlookers gathered in front of the small, one-story, four-room house, hoping to catch a glimpse of the occurrence, which was said to also include a talking cat, an exploding crucifix, levitating refrigerators and misty apparitions.  But after the Bridgeport police superintendent called the incident a hoax, the hype around the home and family died down.

Now, 43 years later, author William J. Hall, a Bridgeport native, examines the events in his riveting book, "The World's Most Haunted House, The True Story of the Bridgeport Poltergeist on Lindley Street." Accompanying Hall to the Library presentation will be author, broadcaster and “paranormal adventurer” Paul Eno, who was the young seminary student during the case and is one of the few surviving eyewitnesses.

Hall, who has worked as a professional magician, said he was a skeptic like everyone else until he went back to original newspaper articles, audio interviews of first responders and city records. "There were over 100 witnesses," Hall has said. "This is one of the most witnessed hauntings in history."  Hall used those same documents to retell the story of the Goodin family, hoping to dispel a popular myth and to add context to a ghost story he now believes himself.

The story began in 1960 when Gerard and Laura Goodin purchased the home on Lindley Street. In 1967 their only son, who was stricken with cerebral palsy, died at the age of 6.

The family then adopted a girl, Marcia. The strange occurrences started once the girl entered the home. For some reason, they got worse in 1974 and the family called the police.  Clergy were also called to examine and bless the home. Building officials examined the foundation, which was deemed safe.

Even Ed and Lorraine Warren, the famous paranormal investigators who were present during the poltergeist manifestation, later called the event, "one of the most famous well-documented poltergeist cases in history.”

The program is offered free of charge anyone ages 16 and older.  Registration is required online at danburylibrary.org or call 203-797-4505, option 3.  Books will be available for purchase and signing.  For additional information contact Aurelio Muraca at 203-797-4505, ext. 7726.

The Danbury Library is located at 170 Main Street, Danbury, CT.