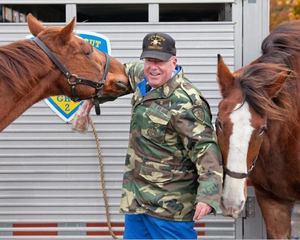 More than 100 photos of the Second Company Horse Guard,(https://www.facebook.com/f2ghg/)  taken over seven years by Marleen Cafarelli, will be on display at the Newtown Municipal Center Gallery January 2-31. Called A Love of Horses ~ Life in The 2nd Co. Governor’s Horse Guard,the month long photography show is an annual event. This year, there will be a reception on January 7 from 1-3 pm sponsored by the horse guard. The Horse Guard troopers, all volunteers, will be present to talk about their work and their horses. Refreshments will be served.

The Gallery at The Municipal Center is open during regular business hours and, for this exhibit, open late Wednesdays through January 24.

The Second Horse Guard, housed on the grounds of Fairfield Hills in Newtown, Ct, is one of the last active cavalry militia units in the United State. The First Horse Guard is in Avon. In service since 1808, Troopers perform mounted military drill and musical ride as well as the participating in the Newtown Labor Day Parade each September. Their original purpose was to provide safe passage to the Governor wherever he goes.

Always threatened with budget cuts, there will be an opportunity to contribute to the Second Horse Guard at the reception.

“I first went to see the Horse Guard to practice making a panorama photograph,” M. Cafarelli notes. “But I found the people to be so welcoming and the place so calming that I came back often.” She’s been on a horse just once in her life, but calls them “Special Creatures.”

A self taught photographer, Ms. Cafarelli began her interest in photography when she was a flight attendant for Eastern Airlines. “I loved the travel,” she said “And there was so much to photograph.” It was while working for eastern Airlines that she met her husband Bill, then a pilot and now her partner in PhotoArtWorks   (https://photoartworks.smugmug.com/.)

Currently, PhotoArtWorks concentrates on corporate photography. One of their most interesting assignments is being present in operating rooms when new equipment is being used. “I take the still photographs,” she said, “and Bill does the video. Then our work is used for training purposes all over the world.”

Ms Cafarelli’s work is on the cover of the Fall/Winter issue of “Kitchen and Baths” magazine as well as the article “Old School.”

She was the photographer at Governor Dannel P. Malloy’s first inaugural ball in 2011 and is the Official photographer of the Newtown Arts Festival. She is a member of the Connecticut Photographers Association.