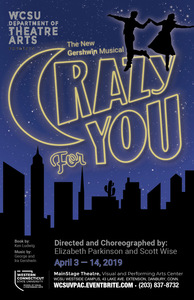 The Western Connecticut State University Department of Theatre Arts will present “Crazy for You” from April 4-14 in the MainStage Theatre of the Visual and Performing Arts Center on the university’s Westside campus, 43 Lake Ave. Extension in Danbury.

Featuring the music and lyrics of Ira and George Gershwin, the production is a tribute to the optimistic musicals that were popular in the 1930s. It opened at New York’s Shubert Theatre in February 1992 and received the 1992 Tony Award for Best Musical and the Olivier Award (London) for Best Musical the following year.

WCSU’s production is directed and choreographed by Scott Wise and Elizabeth Parkinson. Wise and Parkinson are veterans of the Broadway community, with some highlights including Wise’s Tony Award for “Jerome Robbins’ Broadway” and his two nominations for “Fosse”and “State Fair” and Parkinson’s Tony nomination and Astaire Award win for “Movin’ Out.”Parkinson also has worked extensively with dance companies across the globe, particularly The Joffrey Ballet.

“When we did ‘Crazy for You’ in Russia at the Boris Tschukin Theatre Conservatory, we didn’t really have the dancers you might expect for this show, but that forced us to really get to the truth and heart of the story,” Parkinson said. “There’s so much slapstick and vaudevillian humor in this show, but beneath it is a sweet love story and a touching coming of age. Here at WCSU, we are fortunate enough to have dancers with the necessary experience, so we get to combine both the truth and honesty of this story with some fantastic dancing!”