Details
Published on Thursday, 28 October 2021 10:53
Written by The Ridgefield Playhouse 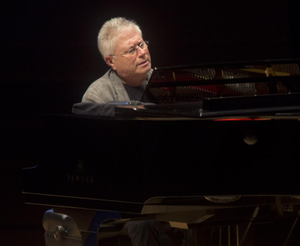 With his unique ability to capture the imagination of audiences, legendary composer, Alan Menken, has won more Oscar Awards than any other living person. He has created some of the most beloved songs and musical scores for more than 35 years and now, fans have the opportunity to get up close and personal with the Emmy, Grammy, Oscar and Tony Award winner when he performs at The Ridgefield Playhouse with a special “hometown” show on Saturday, November 6, 2021 at 8pm.

The event is part of Teed & Brown Broadway & Cabaret Series and sponsored by Mercedes-Benz of Danbury and Freixenet Mionetto. Ticket holders are invited to enjoy a complimentary wine tasting in the lobby before the show.

Menken leads the audience through a journey of more than 35 years of hit songs, movies and musicals – Little Shop of Horrors, Sister Act, The Little Mermaid, Aladdin, Beauty & the Beast, Enchanted, Tangled and many more! This special performance features Menken singing some of his best-loved tunes while accompanying himself on the piano. Coupled with a rare multimedia experience, Menken shares the stories and secrets of his journey from “Sesame Street,” to premiering three simultaneous shows on Broadway. Enjoy a great night out with dinner and a show – visit Bailey’s Backyard (23 Bailey Avenue, Ridgefield) for dinner before the show and receive 10% off your bill when tickets are presented. Media sponsor for the event is Broadwayworld.com.

With eight Academy Awards, Alan Menken has received more Oscars than any living person, and is the recipient of numerous other awards including 7 Golden Globes, 11 Grammys, Drama Desk Awards, and a Tony Award. In 2020 he was the recipient of the Max Steiner Film Music Lifetime Achievement Award, and is the most recent artist to earn EGOT status (EGOT, an acronym for the Emmy, Grammy, Oscar, and Tony Awards, is the designation given to people who have won all four awards).

Menken’s ambition, from his earliest memories, was to become a composer. In his early years he worked as a ballet and modern dance accompanist, a musical director for club acts, a jingle writer, arranger, a songwriter for “Sesame Street” and a vocal coach. He performed his material at clubs like The Ballroom, Reno Sweeny and Tramps. He showcased material from early musicals like Midnight, Harry The Rat and Apartment House. He contributed material to revues like New York’s Back In Town, Big Apple Country and The Present Tense. Then he met Howard Ashman. Until working with Ashman, Alan Menken was almost exclusively a composer/lyricist. But in 1978 after meeting to discuss a musical version of Kurt Vonnegut’s novel, God Bless You Mr. Rosewater, Menken and Ashman became a songwriting team and with only a few exceptions.

Then came Little Shop of Horrors, the musical that put Ashman and Menken on the map as in-demand, up-and-coming musical theater writers. Based on the Roger Corman B-movie classic, it opened at the WPA Theater in the spring of ’82 to great reviews, lines around the block and countless offers from producers. It moved to the Orpheum Theater on 2nd Ave and St. Marks Place, where it ran for over 5 years and set the box-office record for highest grossing Off-Broadway show of all time. Productions followed in Los Angeles and London, along with national tours and all the rest.

Most exciting was a movie deal, which opened doors to Hollywood. When Disney came calling with The Little Mermaid, the opportunity to create an animated musical that could sit on the shelf alongside Snow White and Cinderella, could not be ignored. With The Little Mermaid, Menken began his career as a composer of film underscore. Although he had never attempted a film score before, Menken learned on the job and was rewarded with an Oscar for Best Score, as well as one for Best Song (“Under the Sea”).

More importantly, the movie proved groundbreaking. Animated Musicals were back. People loved them and live-action films wouldn’t be far behind. Menken came full-circle when The Little Mermaid opened on Broadway in 2008 at the Lunt-Fontanne Theatre. Aladdin, Hunchback Of Notre Dame, and Newsies soon followed, as well as new film-to-stage adaptations of Sister Act and Leap Of Faith.

For more information or to purchase touchless print at home ticket ($125, Meet & Greet upgrade $100 additional) go online at www.ridgefieldplayhouse.org or, you can visit or call the box office (203) 438-5795.  The Ridgefield Playhouse is a non-profit performing arts center located at 80 East Ridge, parallel to Main Street, Ridgefield, CT and is committed to keeping the arts alive and available to all.