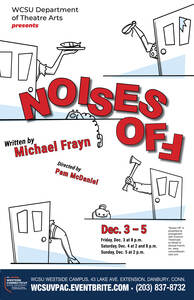 Western Connecticut State University’s Department of Theatre Arts presents “Noises Off,” a Mainstage Theatre Play, Dec. 3-5 at its Visual and Performing Arts Center at 43 Lake Ave. Extension in Danbury. Tickets for this comedy about theatre can be purchased in advance at wcsuvpac.eventbrite.com.

“Noises Off” takes a fond look at the follies of theatre folk, whose susceptibility to out-of-control egos, memory loss and passionate affairs turn every performance into a high-risk adventure. Brimming with slapstick comedy, “Noises Off” is a backstage farce, complete with slamming doors, falling trousers and even flying sardines. This play-within-a-play is directed by Pam McDaniel, professor and chair of WCSU’s Department of Theatre Arts.

Written in 1982 by the English playwright Michael Frayn, “Noises Off” is a comedy about what goes on behind the stage and is named for the sounds coming offstage during a performance. The play was so successful that it was made into a movie in 1992 starring Carol Burnett and Michael Caine.

Public performances are 8 p.m. on Friday, Dec. 3; 2 p.m. and 8p.m. on Saturday, Dec. 4; and at 2 p.m. on Sunday, Dec. 5. Ticket prices at wcsuvpac.eventbrite.com are $25 plus fees for general admission seating, and $15 plus fees for senior citizens, children 12 and under and group tickets. WCSU student tickets are $10 plus fees. All sales are final. Masks must be worn at all times and three-feet social distancing will be enforced in the Visual and Performing Arts Center. This production is suitable for audiences aged 10 and over.