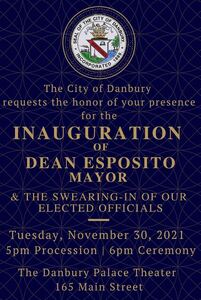 Mayor-Elect Esposito will be sworn in as Danbury’s next Mayor on Tuesday, November 30th, 2021. The swearing-in ceremonies will begin at 4:30 pm with a prayer service at the First Congregational Church of Danbury for all Danbury elected officials presided by Danbury clergy of various faiths and special guests.

It will be followed by a procession at 5:10pm from Danbury City Hall that will conclude at the Palace Theater. The procession will include Celtic Cross Pipes and Drums, Danbury Police and Fire Department, Honor Guard, Elected Officials, the Mayor-Elect and his family.

The swearing-in ceremonies will begin promptly at 6pm at the Palace Theater. Commissioner Mark D. Boughton will serve as the Master of Ceremonies.

Following the swearing-in ceremony, there will be a reception held in the lobby of the Palace Theater.

Reservations are required prior to the swearing-in for admittance. To register, please visit http://Danburyinauguration.eventbrite.com. Space is limited.