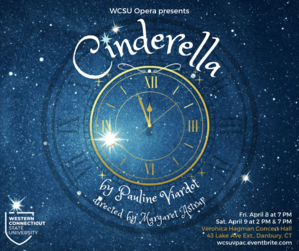 Western Connecticut State University Opera will present public performances of “Cinderella” by Pauline Viardot at 7 p.m. on Friday, April 8, and at 2 and 7 p.m. on Saturday, April 9, at the Veronica Hagman Concert Hall in the university’s Visual and Performing Arts Center, 43 Lake Ave. Extension, Danbury. Tickets are available at www.wcsuvpac.eventbrite.com.

Viardot’s “Cinderella” is a humorous and witty retelling of Charles Perrault’s fairy tale, composed in an operetta style combining musical numbers and dialogue and intended for salon-style chamber performances. The operetta premiered in 1904 in French; Pauline Viardot was one of the great opera singers of the late 19th century as well as a composer and pianist.

“Cinderella” is directed by WCSU Opera Director and Professor of Music Dr. Margaret Astrup and features a new English translation by WCSU Opera Coach Andrew Gordon. Instead of a stepmother, this story tells the tale of the foolish Baron de Pictordu and his two vain daughters, Maguelonne and Armelinde, who are both chasing after Prince Charming. When an invitation for a grand ball arrives, they leave behind stepsister Marie, who they call “Cinderella.” Hearing her sad song, La Fée (the fairy godmother) appears and promises to make Cinderella’s dreams come true.

This special operetta features a double cast of WCSU students: Daisy Lowe, of Brookfield, and Julie Cooke, of Babylon, New York, as Cinderella; Ariana Keller, of Oxford, and Melissa Travali, of Newtown, as Maguelonne; Rebecca Brideau, of Trumbull, and Alondra Cardona, of Hamden, as Armelinde; Nikolas Brannan, of Norwalk, as Prince Charming; Christopher Scanlon, of Wappingers Falls, New York, as Chamberlain Barigoule; Connor Reese, of Naugatuck, and Anthony Uriano, of Tolland, as Baron de Pictordu; and Davonte Mitchell, of Old Saybrook, and Ian McNulty, of New Milford, as the royal footman.

For more information, contact, the Office of Public Relations at This email address is being protected from spambots. You need JavaScript enabled to view it. . Click here to join the WCSU School of Visual and Performing Arts mailing list or go to www.wcsu.edu/svpa/events/ for a list of performance events.