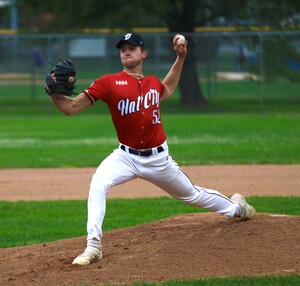 The Westerners’ pitching staff recorded seventeen strikeouts and outdueled the Muskrats in a 5-3 victory.

Danbury (6-5) ended their three-game losing streak, and Winnipesaukee dropped to 5-5 on the season despite holding their opponent to only three hits.

“We got some timely hits, Cody did a great job, and Logan did a great job tonight,” Coach Ratchford said after the game. “I’m thankful we pulled this one out.”

Muskrats’ shortstop Ian Battipaglia went 2-3 with a walk and two runs scored, and third basemen Matthew Alifano had a 1-3 night with 2 RBIs.

In the bottom of the second, Danbury would strike first on the two-run bomb from Canales. Westerners’ left fielder Henry Strmecki worked a one-out walk, and Canales followed by belting a home run over the left-field wall to give his ballclub an early 2-0 advantage.

After both starters tossed up two straight scoreless innings, Winnipesaukee fought back in the top of the fifth. Ian Battipaglia and Christian Mercedes kicked the inning off with walks, and Matthew Alifano drove Battipaglia in with a scorching line drive into the right-center field gap. Alifano’s RBI single cut the lead in half, and Mercedes would trot home from third on a wild pitch to tie the game at 2.

In the bottom of the fifth, the Westerners would reclaim the lead thanks to the speed of centerfielder Jermaine White. White led off the inning with a walk, stole second easily, and jogged home from third on a wild pitch to make it a 3-2 ballgame.

Danbury would add to their lead with two insurance runs in the bottom of the eighth. Billy Gerlott started the frame by crushing a double into right, and Nicholas Romano would trade places with him after smoking an RBI double into left-center field. After a Henry Strmecki walk, Canales would rip a ball right at Muskrats’ first basemen Brett Paulsen. Paulsen stepped on the bag and tagged out Strmecki for two quick outs, but Romano’s aggressiveness on the basepaths allowed him to race home and dive under the catcher’s tag to plate the fifth run of the game.

Even after Danbury’s insurance runs, the Muskrats still had a rally in their bones. Winnipesaukee loaded the bases with two outs and forced Westerners’ relief pitcher Logan Tabeling to walk in a run and make it a 5-3 deficit. However, Tabeling stayed as cool as a cucumber and struck out Muskrats’ second basemen Roddy Hernandez looking to give his team a much-needed victory.

Westerners’ starter Cody Carwile (1-0) finished the night in the win column. The Westerners’ Player of the Game carved through the Muskrats lineup by getting ahead in the count, and he struck out seven of the first nine batters he retired. Carwile went 5.0 innings, surrendered two runs on four hits, walked two, and punched out a whopping ten batters.

“I’m from Florida, so I wasn’t used to pitching in this weather,” Carwile said after the game. “I put up with it and just kept getting ahead in the count.”

Muskrats’ starter Ryan Qualey (0-1) turned in a fine outing for his ballclub, but the free pass was his worst nightmare and caused him to suffer the loss in Saturday’s contest. Qualey went 4.1 innings, surrendered three runs, walked six, and struck out only one batter.

Logan Tabeling did yeoman’s work for his ballclub on Saturday. Despite running into trouble in the ninth, he recorded a four-inning save (1) by striking out seven and conceding only one run on three hits.

Danbury will strive to continue their winning ways when they travel to McKenzie Stadium and battle the Valley Blue Sox. Zach Grace will make his first start as a Westerner on Sunday night, and the first pitch will be thrown at 5:05 pm ET.