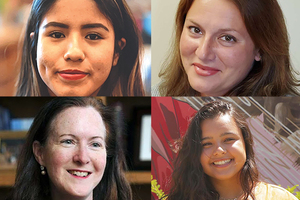 Presented by Union Savings Bank, the event will honor remarkable individuals who have contributed to the advancement of the immigrant community. It will feature three community award categories with honorees selected by TNADF, one $3,000 American Dream scholarship, and an exciting announcement about TNADF's plans to help immigrants access services and resources available in the community in partnership with the City of Danbury.

The 2022 AMERICAN DREAM AWARDS HONOREES ARE:

COMMUNITY HERO AWARD – awarded to an institution that has had an impact on the lives of immigrants in our community.

CIFC is a locally based, independent non-profit dedicated to advancing our communities and fostering greater opportunities for low-and moderate-income individuals and families through a combination of health and education programs and housing and economic development projects. It is the only such organization in Western Connecticut. During the pandemic, CIFC administered more than 23,000 COVID-19 tests and 12,000 vaccines to the community.

Daughter of Brazilian immigrants, Barcelos is a 21-year-old freelance artist and muralist. She was selected and granted an award by the City of Danbury to design and paint a 45-foot mural celebrating the life and legacy of classical singer and civil rights pioneer Marian Anderson. Barcelos has also painted large-scale murals for the University of Connecticut, Wellmore Behavioral Health, and businesses like Matteo’s Multicultural Market in Danbury, and The Cosmopolitan Salon in Brewster, among many others. She graduated from the University of Connecticut in May of this year. ­­­

LIFETIME ACHIEVEMENT AWARD – awarded to an immigrant or decedent of immigrants that has had a lasting impact on the community (50 years of age or older).

Dianne E. Yamin was elected as probate judge in 1990. She made history as the first woman to hold that position in Danbury and as the youngest elected judge in the state. Since 1990, Yamin has assisted people in various family-related court matters as Danbury's probate judge.

Judge Yamin also worked extensively to bring awareness to the immigrant community about standby guardianship. This plan prevents children with undocumented immigrant parents from becoming wards of the state in the event of their parents' deportation. She recently announced her retirement.

AMERICAN DREAM AWARD SCHOLARSHIP - $3,000 awarded to an individual 16 years or older who is an immigrant or a child of immigrants living in the Fairfield County area, who has faced many challenges on their journey to achieve their American Dream.

Born in San Fernando, Azuay, Ecuador, Loja moved in with her father in the United States at 11 years old when her mother passed away. The transition was a constant struggle, fitting in at school, learning the language, and maintaining her mental health. Nonetheless, she persevered, graduating with a 3.8 GPA from Danbury High School. She is now majoring in Management Information Systems at WCSU. The scholarship is furnished by the event's presenting sponsor: Union Savings Bank.

"To receive this award means that all my hard work was not in vain, that I am welcome in this country, and it will prove that the American Dream still lives on by providing me with the help I need to further my career and impact in the community," said Loja.

The theme of this year's Gala, “A celebration of American Immigrants” was inspired by the song ‘King of The City’ by country music star Jennifer Nettles. In the ballad, Nettles champions hard-working American immigrants, inspired by a real-life window-washer who died in the 9/11 attacks. The event will be held 5 days after the 11th anniversary of the attacks.

Nettles told Rolling Stone in an interview that she wanted to "humanize the immigrant story as an American story and allow people a different narrative from what they might be seeing on the news or in their communities."

"Each immigrant wave that has come to our community has made contributions from which we all benefit. Immigrants of past generations have paved the way for immigrants of today. Although their paths to reach our country may differ, they share a common goal - the American Dream." said Celia Bacelar-Palmares, TNADF president, adding, "Our love and commitment to this country is unwavering like the song says: 'It's true I wasn't born here, but my heart is sworn here...'"

A medley of live musical performances featuring songs honoring the journey of the American Immigrant, including “King Of The City,” will color the awards ceremony, performed by local artist “aka Nora”, CT's Got Talent Second Place winner. Singer-songwriter, aka Nora, is known for her soulful approach to popular songs, having been awarded titles such as, "The Voice of Danbury" and "Hudson Valley's Most Talented," she is recognized for her powerhouse vocals across the tri-state area. In recent years, aka Nora has broken into the world of music streaming. Her original music can now be found across all streaming platforms.

Tickets include a three-course dinner, dancing, live entertainment, and the inspirational American Dream Awards ceremony, all with social distancing and COVID-19 safety protocols. Ticket sales will benefit Mission Health Day – a day of free health screenings and other community services for the uninsured and the income challenged hosted by Nuvance Health.  Ticket sales also will support The New American Dream Foundation programs, including its Hot Meal program.

At the start of the pandemic in 2020, TNADF created its Hot Meal program, which has served children, families, and seniors in Danbury with over 35,000 meals purchased from The Amber Room Colonnade. In 2021, the program evolved to a Hot Meal program for seniors, delivering 650 meals to seniors living in tax credit communities in Danbury.

“They are the sons and daughters of the previous generation of immigrants, in which every new community stands on its shoulders. Our hot meal program became our way to give back to those that helped build our community,” said Emanuela Palmares, TNADF vice-president, adding, “We ask the community to join us on September 16 to support this important work.”

To buy tickets, tables, and ads in the event booklet, visit www.americandreamgala.com.