The Yale Whiffenpoofs Holiday Concert at The Palace Danbury on Sunday, December 11

Details
Published on Tuesday, 29 November 2022 13:21
Written by The Palace Danbury 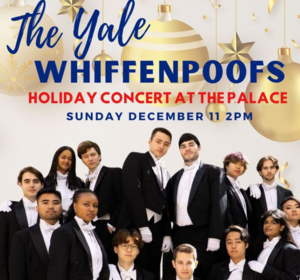 The Yale Whiffenpoofs Holiday Concert at The Palace Danbury on Sunday, December 11 at 2:00 pm

Join us this December for a holiday concert with the Wonderful Whiffenpoofs, the internationally acclaimed a cappella singers from Yale University!

Every year, a group of rising Yale seniors are selected to be in the WHIFFENPOOFS  the world’s oldest and best-known collegiate a cappella group. Founded in 1909, the “Whiffs” began as a senior quartet that met for weekly concerts at Mory’s Temple Bar, the famous Yale tavern. Today, the group has become one of Yale’s most celebrated traditions.

Their performance seems effortless, but it is not easy to become a Whiff. Only 14 highly coveted spots are available for Yale juniors to join the world’s oldest and best-known collegiate a cappella ensemble.

The Whiffs are no strangers to fame, having performed at venues such as Carnegie Hall, Lincoln Center and the White House. They’re at ease on television, too, having been part of hits such as “Gilmore Girls,” “Glee” and “Jeopardy,” among others. They’ve sung at the Rose Bowl and on “Saturday Night Live.” And they’re coming back to The Palace Danbury this December!