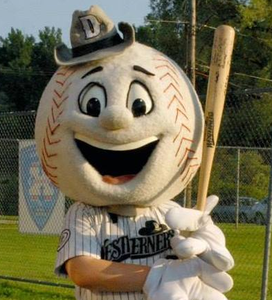 Danbury – The Danbury Westerners improved to 2-0 on the early season as they used a 13 hit effort to beat the New Bedford Baysox 10-7 Friday evening.

The Baysox struck first in the top of the first inning thanks to back-to-back doubles by Thomas Blandini and Rafe Chaumette to score the first run of the game. Westerners starting pitcher Joseph Mancini would strand Chaumette at second with a strikeout of Sam Henrie.

The Westerners would answer immediately. After Justin Jordan reached base on an error, Vinny Bailey would connect on the first pitch he saw and send it over the center field fence to give the Westerners their first lead of the game.

Danbury would continue to show off their power in their home ballpark as Vinny Bailey would hit his second home run of the game followed by second basemen Alex Barrata to even the game at 5.

“I felt like my stride and my timing was really good,” said Vinny Bailey. “I felt like I was on time for the fastball and hit it well.”

Both starters would be removed after the third, putting the game in the bullpen’s hands. But who would take advantage first?

It would be Danbury. In the bottom of the fourth, three straight walks and a fielder’s choice loaded the bases two outs for Alex Barrata. The Westerners second baseman would bloop a single to center field, scoring two runs and giving Danbury the 7-5 lead.

As the middle innings approached, the Westerners matched any run total New Bedford seemed to put together, keep their lead safe.

The Danbury bullpen would pitch six innings while allowing just two runs to close out the victory.

“I emphasize to these guys that they have to do their work,” said Westerners head coach Josh Parrow. “Whether down big or up big, they have to have the same mentality. They have shown that.”

For Danbury, the offensive attack allowed them to remain in the lead and hold onto it.

“We’re all seeing it well and putting together really at bats,” said Bailey. “Everyone is feeling really confident.”

The Westerners look to remain perfect on the early season as they travel to Vermont to take on the Upper Valley Nighthawks Saturday night at 6:00.