Connecticut COVID Update: Vaccine Given to 55% of Residents Over 16, Variants of Concern, and More 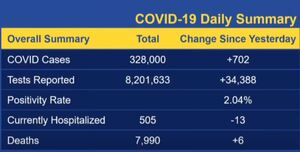 The following data represents the total number of COVID-19 vaccines administered in Connecticut, as reported to the state as of today:

*NOTE: A total of 104,769 doses of the single-dose J&J vaccine are included in each category

Connecticut continues to rank among the top three states in the nation that have administered the most vaccines per capita.

A total of 55% of everyone in Connecticut over the age of 16 has received at least one dose so far, including:

All Connecticut residents over the age of 16 are currently eligible to receive the vaccines. Appointments must be made in advance at all clinics statewide. To learn how to make an appointment, visit ct.gov/covidvaccine and enter a zip code to find the nearest clinics.

Data updates on variants in Connecticut

The following data contains the cumulative number of SARS-CoV-2 variants that have been identified among Connecticut residents as of today:

The Connecticut Department of Public Health today released its weekly COVID-19 Alert Map, which indicates that 132 of 169 towns and cities in Connecticut are currently in the red zone alert level, the highest of the state’s four alert levels.

The color-coded zones include:

The weekly alert map is also accompanied by a chart that provides guidance on recommended actions based on the alert levels for individual residents; institutions such as schools, houses of worship, and community organizations; and municipal leaders and local health directors.

The COVID-19 Alert Map is updated every Thursday afternoon and can be found within the Data Tracker page of the state’s coronavirus website at ct.gov/coronavirus.